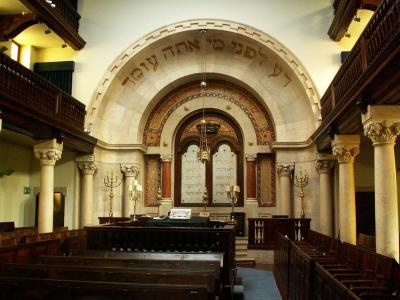 The Lisbon Synagogue, called Shaaré Tikvah (Gates of Hope) is a historical synagogue in Lisbon.

There have been Jews in Lisbon at least since the Middle Ages, but the community suffered a major blow in 1497, when an edict by King Manuel I ordered Jews either to convert to Christianity or to leave the country. All synagogues of Lisbon were confiscated by the King and given to Christian religious orders. For the Jews that converted to Catholicism, called New Christians (cristãos novos), the establishment of the Portuguese Inquisition in 1536 meant a permanent danger of being persecuted.

The situation for Judaism in Portugal changed at the beginning of the 19th century, when the Portuguese Inquisition was abolished and Sephardi Jews from Morocco and Gibraltar, mostly merchants, started to migrate to Lisbon and other parts of Portugal. During the whole 19th century, the small Lisbon Jewish community had no formal synagogue and had to celebrate their religious rites in private houses.

Finally, in 1897 a commission was established with the mission of building a central synagogue in Lisbon. The project was entrusted to the architect Miguel Ventura Terra, and the works began in 1902. The main facade of the synagogue faces an inner courtyard, since Portuguese law at the time forbade non-Catholic religious temples from facing the street.

Inaugurated in 1904, the Lisbon Synagogue was the first synagogue to be built in Portugal since the late 15th century. Ventura Terra conceived a temple in a style mixing Neo-Byzantine and Neo-Romanesque, consistent with the Oriental fashion for Synagogue architecture.

In 2004, a ceremony was held to celebrate the synagogue's 100th anniversary. Portuguese President Jorge Sampaio and Israel's Sephardi Chief Rabbi Shlomo Amar were among the speakers.
Image by Boaz Gabriel Canhoto on Wikimedia under Creative Commons License.
Sight description based on wikipedia