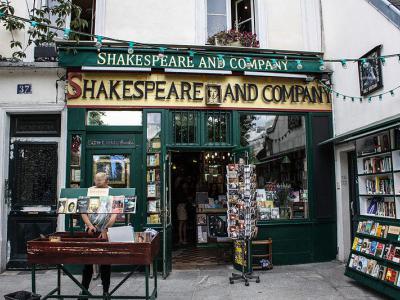 Located in the Latin Quarter of Paris, Shakespeare & Company is one of the oldest and the most iconic English-language bookstores, with a great selection of both new and old, from different periods and of different genres. If you need to stock up on study books, want something classic to read or are simply just looking for inspiration to write, it will provide you with all the material you need, and there are lots of nooks and crannies where you can take a break and just read or skim books.

The original bookstore Shakespeare & Company was founded in 1913 by an American girl named Sylvia Beach and used to house aspiring writers, or young people who went to Paris in search of fame. Although it was shut down during World War II, it was reopened at its current location in 1962 by American George Whitman. The fame of the bookstore lies in the fact that many famous writers like Ezra Pound, Ernest Hemingway, F. Scott Fitzgerald, James Joyce were its frequent visitors. The new Shakespeare and Company also received important names in literature since it was frequented by writers Allen Ginsberg, William S. Burroughs, Jack Kerouac, and Anaïs Nin.