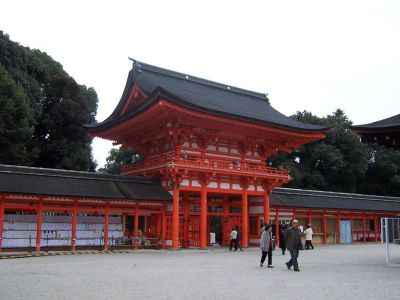 Shimogamo-Jinja is one of the oldest shrines in Kyoto and one of the 17 monuments in the old city declared World Heritage Sites by the UNESCO.

The shrine dates back to the 6th century and was originally constructed to protect the city of Kyoto. It is located within a forest, called Tadasu no Mori (the “Forest of Truth”), and is dedicated to the deities Kamotaketsunumi-no-Mikoto and his daughter Tamayorihime-no-Mikoto, as well as to the God of Fire and Thunder, Honoikazuchi-no-Mikoto. The shrine received imperial patronage during the Haien Era and from 1871 to 1946, being a Kanpei-Taisha or government-supported shrine of the first rank.

Shimogamo-Jinja is famous for the annual Aoi Matsuri (“Hollyhock”) Festival that takes place on May 15th. It is also the site of an annual New Year Ritual, called Kemari Hajime. Kemari is a traditional Japanese sport originated in the Haien Era. It had almost disappeared after the Meiji Restoration but was revived by the efforts of the Kemari Preservation Society in 1903. The Tadasu no Mori surrounding the shrine is a green oasis of tranquility amid the bustling metropolis. The park has many ancient and beautiful trees, is crisscrossed by clear streams, and has been regarded as an important Haien-era botanical garden.

Why You Should Visit:
The shrine itself is not big, but the surrounding it park-like area offers a pleasant respite in the shade of old trees.
The tall bamboo is peaceful and a very nice alternative to the usually crowded bamboo grove in Arashiyama.

Tip:
Any festival held here has some interesting traditions to it, so it's probably best to visit here with a knowledgeable guide to explain them.