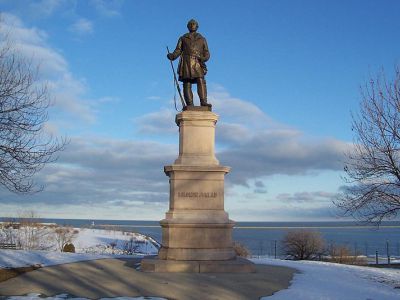 The Juneau Monument is a public artwork by American artist Richard Henry Park located on the grounds of Juneau Park, Milwaukee. The base of the statue is made of limestone. On top of the base is a bronze statue of Solomon Juneau.

He was the postmaster and the first president of the Village of Milwaukee. He was elected the first mayor of the City of Milwaukee in 1846. Juneau died in 1856 while making an Indian payment for the U.S. Government at a reservation in Keshena.

Shoe manufacturers Charles T. Bradley and William H. Metcalf, friends of the Juneau family, donated the monument as a gift in remembrance of the first mayor of Milwaukee. The sculpture was unveiled on July 6, 1887 by Juneau’s granddaughter, Hattie White.
Image Courtesy of Wikimedia and Sulfur.
Sight description based on Wikipedia.