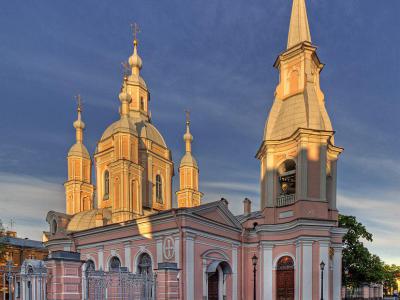 Located on Vasilevsky Island, this pink and white church is one of the last Baroque cathedrals constructed in Russia. It was conceived at the time of Peter the Great as the chapter church of Russia's first chivalric order, of Saint Andrew, whom Peter considered to be his guardian.

The initial architect, Nicodemus Tessin the Younger, was to design a church resembling Saint Peter's Basilica in Rome. He did not, however, get to complete the grand project due to the death of Peter, and two years later, Giuseppe Trezzini, a city architect to St. Petersburg, took it up. He built a modest timber church behind the Twelve Colleges, rather austere with few stylistic pretensions, to which Empress Anna donated furnishings, and the icon screen was taken from a chapel in the neighboring Menshikov Palace.

On 4 July 1761 the wooden temple was struck by lightning and burnt to the ground. The architect Alexander Whist subsequently designed a new cathedral of stone, which took 22 years to complete. So it was not until 21 March 1780 that the five-domed pastel pink cathedral was finally consecrated. The pyramidal bell-tower, attached to the church by a refectory, was built in two tiers in 1784-86.

After the Revolution of 1917, the Bolsheviks confiscated many valuables from the temple. On 24 April 1924 a crowd of several hundred worshipers attempted to defend the icons and clashed with the members of the "expropriation committee". On 16 May 1938 the cathedral was closed down, its priests arrested and the bells destroyed. However, the impressive Baroque iconostasis was rescued, while a 17th-century icon with the portraits of Patriarch Nikon and Tsar Alexis was taken to the Russian Museum. During the Siege of Leningrad, the dome was equipped with anti-aircraft cannons to protect the area from the enemy bombers.

In 1992 the cathedral of St. Andrew was returned to the Russian Orthodox Church. In 2001, an obelisk was unveiled in front of the building to commemorate the tercentenary of the restored Order of St. Andrew.