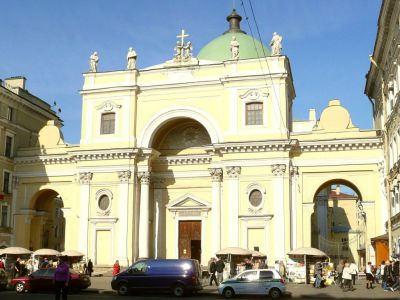 The Catholic Church of St Catherine in St. Petersburg is the oldest Catholic church in the Russian Federation.

In 1738 Empress Anna granted permission for the structure to be erected on Nevsky Prospekt, upon which the project changed several hands before it fell to the Italian architect Antonio Rinaldi who finished it in 1783. Because the Empress at the time was Catherine II (also known as Catherine the Great), the church was named after St. Catherine of Alexandria.

Under the Soviets, the activities of the church were repressed: the rector was shot in 1923 and the church itself was closed and ransacked in 1938. The building was further damaged by fire in 1947, destroying the internal decorations and organ. For the next 30 years, it was used solely as storage space for the nearby Museum of History of Religion and of Atheism. In 1984 the building was ravaged by fire again, following which it was used as offices and apartments.

Following the collapse of the Soviet Union, the building was returned to the Catholic Church in February 1992. Remarkably, during the ensued reconstruction, a crucifix previously retrieved from the sanctuary in 1938, was returned by a woman who had gone into the ransacked temple and taken it. The restoration of the church was mostly completed in 2003.

The temple stands 44 m in length, 25 m in width, and 42 m in height, and can hold up to 2,000 people. Mass services are available in English, Latin, Polish, and Russian to address the needs of the multi-ethnic congregation. The church also has a shop that sells an assortment of religious literature. Visitors and tour groups are welcome, but the parish request that you notify them in advance.
Image Courtesy of Wikimedia and Angela Monika Arnold.
Sight description based on Wikipedia.