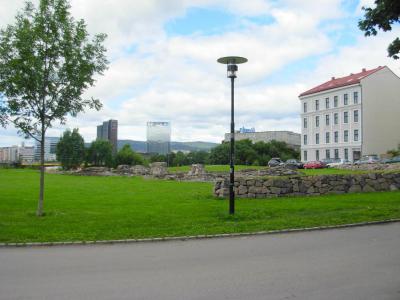 The church was consecrated to St. Clement, who was one of the 1st-century popes. He was martyred by being drowned with an anchor tied around his neck and thus became the patron saint of, among other things, seafarers.

It was a stone church with a tower, and was one of the very few churches with the double-nave floor plan. There were entrances to the south and west. Along the middle axis of the choir there were three pillars which stood in a row along the middle of the church and supported the roof. The church went out of use after the Protestant Reformation and was probably demolished in 1540.

The ruins were first exposed and examined through excavation by architect Gerhard Fischer in 1921, then remained for years unnoticed. In 1970–71, archaeologist Ole Egil Eide had the opportunity to dig further into the ground under the church, and found traces of burials, 81 in all, all of which older than the stone church. Seven layers of burials were found under the stone church.

Beneath the sand layer, Eide found additional 60 graves. His interpretation is that there have been at least two churches, presumably stave churches, on the spot where the stone church was built around 1100. The oldest of the graves were radiological dated to about 980-1030, and were some of the oldest Christian burials found in Norway.
Image Courtesy of Wikimedia and Helge Høifødt.
Sight description based on Wikipedia.