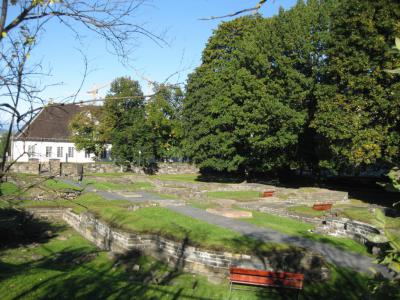 St. Hallvard's Cathedral (Hallvardskatedralen) was the former Oslo Cathedral. It fell into disrepair in the 17th century and is today in ruins. The site is located in the Old Town Oslo.

The cathedral was built during the early 12th century. Oslo was abandoned after a devastating fire in 1624 and the foundation of a new city, Christiania, about one kilometer further west. St. Hallvard's Cathedral was used as a church until about 1655. Besides being the bishop's seat and religious center of eastern Norway for about 500 years, the cathedral was the coronation church, royal wedding church, royal chapel, and one of Scandinavia's most visited places of pilgrimage.

St. Hallvard cemetery is located south of the cathedral. It was the honorary cemetery in Oslo and eastern Norway from around 1130 to 1639. Bishops and other prominent men and women were interred in the church along with Norwegian kings.

First excavations of the ruins were conducted in 1865 by Norwegian archaeologist Nicolay Nicolaysen. Parts of the ruins were removed during the construction of the Ostfold Rail Line in early 1920s. The cathedral was the main attraction when Memorial Park in Old Town (Minneparken i Gamlebyen) opened in 1932. Next to the cathedral ruins lies the ruins of the medieval parish church, Holy Cross Church (Korskirken).
Image Courtesy of Wikimedia and Vidariv.
Sight description based on Wikipedia.