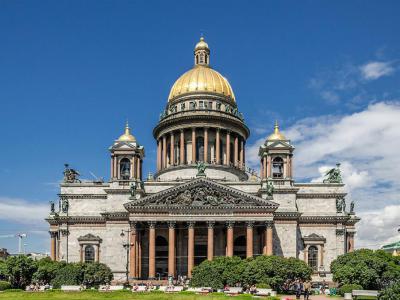 St. Isaac’s Cathedral (Russian: Isaakievskiy Sobor) is the largest cathedral in Russia and the third largest in the world. Dedicated to Saint Isaac of Dalmatia – the patron saint of Peter the Great, the cathedral's construction was commissioned by Tsar Alexander I to replace an earlier church standing on this site.

The construction lasted 40 years, from 1818 to 1858, and was supervised by architect Auguste de Montferrand. The fact that it took so long produced an idiom in the Finnish language: rakentaa kuin Iisakinkirkkoa (“To build like the church of Isaac”).

The project's final budget amounted to an incredible for that period 1,000,000 gold rubles. The result, however, proved to be well worth it – a gray/pink temple of Neoclassical design with a beautiful golden dome, large stained glass of the Resurrection at the altar, stunning iconostasis embellished with malachite, and lapis lazuli columns throughout the interior. A total of 112 red granite columns line the exterior which is also lavishly adorned with bas-reliefs depicting religious scenes and crowned with a rotunda. There are 48 statues in the building: 24 on the roof and 24 on the rotunda.

During the Soviet period the cathedral was stripped of religious trappings and in 1931 turned into the Museum of History of Religion and Atheism. The dove sculpture was replaced with a Foucault pendulum to demonstrate Copernicus's theory. During World War II, the dome was painted over in gray to camouflage against enemy aircraft, and in its skylight was set up a geodesic intersection point to determine positions of German artillery batteries.

After the fall of the communism the museum was removed and a regular worship activity resumed, but only in the left-side chapel. The main body of the cathedral is used for occasional services on feast days. In 2017 the Governor of Saint Petersburg suggested returning the cathedral to the Russian Orthodox Church, but the townspeople opposed the decision and defended the museum status.

Why You Should Visit:
A unique place of worship with a more Western feel rather than traditional Orthodox – clearly related but different...

Tip:
Get the tickets for both the museum and climb to the cupola – both well worth it. Negotiating a lot of steps is rewarded in the end with a bird's eye panoramic view to die for!