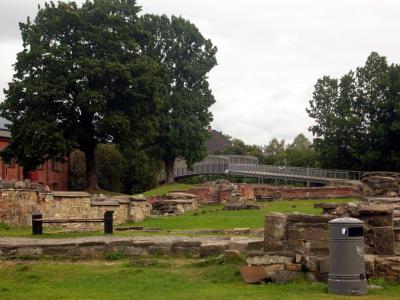 St. Mary's Church had been built of stone in stages with final additions made in the 14th century. A major remodeling in the 1200s gave the church a new Gothic choir. Major rebuild in the 1300s added two large towers to the west and a new and large cruciform choir. It was the royal chapel and had an important political role, as its provost from 1314 also was Chancellor of Norway. The church was set on fire in connection with the Swedish war of independence from the Kalmar union in 1523. In the aftermath of the Protestant Reformation, it was so dilapidated that it could not be repaired and was demolished in 1542.

Excavations were first conducted in 1867 and later in the 1960s. Traces of an older wooden structure were discovered which were dated to around the year 1050. Remains of two people, deemed to be King Haakon V and his Queen consort Euphemia of Rügen, were discovered during excavations and re-interred in the Royal Mausoleum in Akershus Castle.
Image Courtesy of Wikimedia and Grzegorz Wysocki.
Sight description based on Wikipedia.