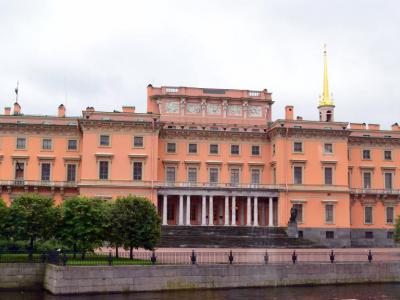 St. Michael’s Castle, also known as Mikhailovsky Castle, is the former royal residence of Paul I. Construction began on the structure in 1797 and was completed in 1800. The architects were Vincenzo Brenna and Vasili Bazhenov. Surrounded by the Moika River and the Fontanka River, the castle reflects French Classicism, Italian Renaissance, and Gothic design.

The exterior of the orange colored building features beautiful bas-relief engravings and stunning white columns. A bronze equestrian statue of Peter the Great greets all who enter the front courtyard. The castle was given to the Main Engineering School in 1819. Since the 1990s, it has been a part of the State Russian Museum.

Among the recommended items to see while visiting the museum are Ilya Repin’s Ceremonial Meeting of the State Council painting, the landscape canvases of Arkhip Kuindzhi, and the museum’s portrait gallery. The portrait gallery features official portraits of Russian Emperors and Empresses, dignitaries, and celebrities from the 17th to 20th century.

In addition, works of arts from 19th century greats Alexi Venetsianov, Pavel Fedotov, Ivan Shishkin, Nicholas Ge, Ilya Repin, and many others are housed on the second floor of the museum.