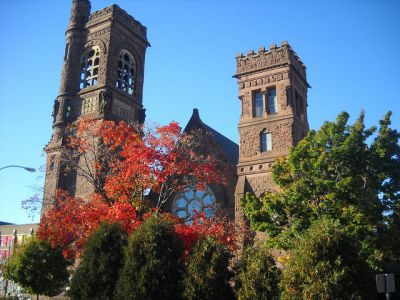 St. Paul's Episcopal Church is located in the Episcopal Diocese of Milwaukee. Noted for its Tiffany windows, it is listed on the National Register of Historic Places and is a designated Milwaukee Landmark. Founded in 1838, St. Paul's parish is the oldest Episcopal parish in Milwaukee and the third established in Wisconsin. It is located in the wealthy downtown east neighborhood of Juneautown.

Members included many prominent citizens of the time, which helped the church to become the most influential Episcopal congregation in the state. The building was designed by local architect Edward Townsend Mix in Romanesque style and built in 1884 using Lake Superior Sandstone, a dark red sandstone found near the Apostle Islands in Lake Superior. It features wrought iron by Master Blacksmith Cyril Colnik. St. Paul's Church also has the largest collection of Tiffany stained glass windows in the state. This includes the largest window ever made by Tiffany Studios of New York. Spanning 30 feet long, 24 feet high and up to two inches thick, it is a copy of Gustave Doré's masterpiece "Christ Leaving the Praetorium." It is believed that the building closely resembles one which was designed by architect Henry Hobson Richardson, whose plans were published in the Architectural Sketch Book, but never built.
Image Courtesy of Flickr and Shamanic Shift.
Sight description based on Wikipedia.