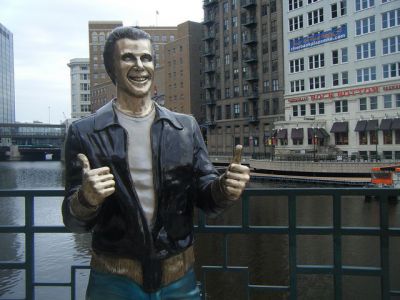 Statue of The Fonz, Milwaukee

The Bronze Fonz is a public artwork by American artist Gerald P. Sawyer, located on the Milwaukee Riverwalk in downtown Milwaukee. The Bronze Fonz depicts Henry Winkler as "The Fonz," a character in the 1970s television series Happy Days, which was set in Milwaukee.

The sculpture, made of bronze, depicts actor Henry Winkler as he appeared in his role as Arthur Fonzarelli (also known as "Fonzie" or "The Fonz"). Fonzarelli was an iconic character in the 1970s television show Happy Days, a sitcom about a family in 1950s–1960s Milwaukee. He stands in his usual attire, a leather jacket and jeans, and gives a two-handed thumbs up gesture, as he often did in Happy Days.

The sculpture was unveiled on August 18, 2008. Most of the Happy Days cast, including Winkler, Marion Ross, Tom Bosley, Erin Moran, Don Most, and Anson Williams, attended the dedication ceremony.
Image Courtesy of Flickr and daniel.baker.
Sight description based on Wikipedia.