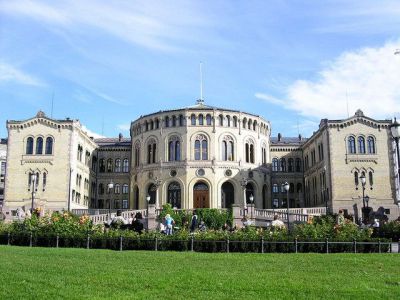 The Stortinget is Norway’s Parliament building. It is located in the very centre of Oslo, on Karl Johanns Gate. Designed by the Swedish architect, Emil Victor Langlet, it has housed Norway’s Parliament, or Storting, since March 1866. The parliament had led a nomadic existence for fifty years between its creation and the opening of the Stortinget. Beginning in a private home, the fledgling government met at schools and university halls before land was purchased in 1857.

Following an open design competition, a red brick, classically Scandinavian design by Schirmer and von Hanno was announced as the winner, only for parliament to overturn the decision, claiming it looked too similar to a church. Langlet’s more classical design, with a circular central chamber and arcade style archways, was selected and built between 1860 and 1866. The building, considered too large initially for its purpose, was not significantly altered until after World War 2.

During Nazi occupation of Norway, the country’s Parliament fled abroad, and the Stortinget was used as an army barracks. Following liberation, the edifice was fully renovated, and a modern four-storey building added at the back. The interior is characterized by opulent red and gold designs, influenced by French and Italian architecture.
Image by Slugrubug on Flickr under Creative Commons License.