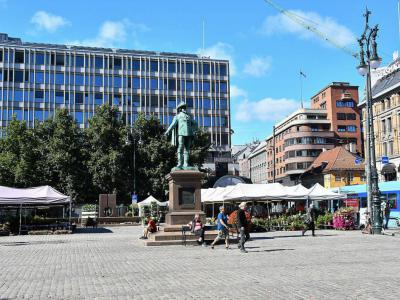 Stortovet, or ‘Grand Plaza’, is a central square, west of Oslo Cathedral. Inaugurated in 1736, it has consistently played a central part in the city’s daily life. The square hosted a large market until 1889, and still hosts seasonal markets to this day. Some seventy years later, Stortovet became a major center once again, with the introduction of the Oslo tramway. The square became a central terminus for a number of tram services in the 1960s, and is still well served by trams and buses.

Stortovet also hosted a public demonstration against the union between Sweden and Norway in 1829, when the city was still known as Christiania. Ceded to Sweden by Denmark in the early 19th century and given increasing autonomy, Norway faced a battle to become a fully independent nation, free of influence from their larger neighbors. The tentative union survived until 1905, when Norway became fully independent.

The grand square features a number of well preserved 18th and 19th century buildings, including Glasmagasinet and Stortorvets Gjaestgiveri. The latter, a dual entrance yellow townhouse dating from the construction of the square, is listed as a Norwegian Cultural Heritage Site, meaning it is protected by the government from demolition or development.
Image by Luigi Chiesa on Wikimedia under Creative Commons License.