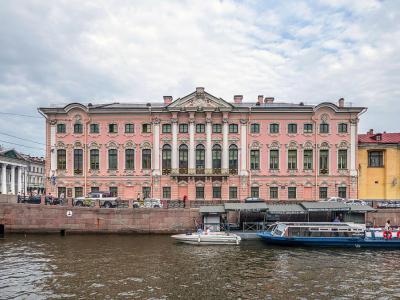 The Stroganov Palace – one of the few Baroque structures on Nevsky Prospect preserved in its original appearance – was built by Italian architect Francesco-Bartholomeo Rastrelli in 1752-1754. Its first owner, Baron Sergei Stroganov, and his family were known in artistic circles and associated with prominent artists, writers, and composers of the day. Many of the Stroganovs were art connoisseurs and major political figures. The world-famous Beef Stroganoff is also their culinary creation.

Sergei Stroganov's son Alexander became President of the Imperial Academy of Arts in 1800. He completed decoration of the palace, and several years later, when the new Empress Catherine II introduced Neoclassical style, commissioned architect Andrei Voronikhin to redo the interiors. Rumors have it that Alexander Stroganov was the architect's father, whose mother was his serf. The first suites decorated by Voronikhin were the Mineral Study, Picture Gallery, Library and Alexander Stroganov's Physics Cabinet. Another two enfilades in the west wing were created for Pavel Stroganov (son of Alexander), of which only the Small Drawing Room has survived.

After the Revolution of 1917, the Stroganovs emigrated from Russia and the palace was nationalized. The Soviets made it a museum of the Russian nobility's lifestyle. In 1929 the museum was shut down and much of its contents taken to the Hermitage. In 1988, the building became property of the Russian Museum which undertook its restoration. The latter saw, among other things, the outside walls of the palace repainted light pink, in keeping with Rastrelli's original design.

An extensive art collection garnered by the Stroganovs over the centuries is currently displayed here alongside a collection of wax figures of the Romanov royal family. Tours in English are available and can be scheduled in advance.

Opening hours: Wednesday - Saturday 10 am - 6 pm; Monday 10 am - 5 pm.
Image Courtesy of Wikimedia and Florstein.
Sight description based on Wikipedia.