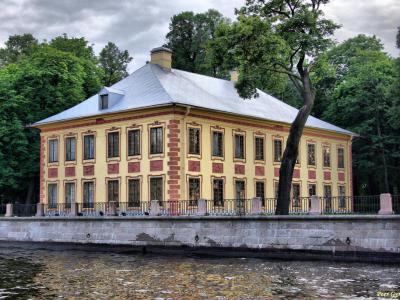 Summer Palace is the former residence of Peter the Great. It was built between 1710 and 1712 by Domenico Trezzini. The two-story brick and stucco yellow palace is located on the banks of the Fontanka River. The palace features a Petrine-Baroque design and is one of the first stone buildings in St. Petersburg.

The 14 room palace was modern for its time and featured running water from nearby fountains. The sovereign occupied the first floor, while his wife lived on the second floor. A small harbor near the palace enabled Peter the Great to sail up to his front door. The palace was used as a summer residence where many festivities, concerts, and dinners occurred. One of those festive events was the Assemblies, a social gathering for St. Petersburg aristocracy.

After World War II, the rooms of the palace were restored to their former glory. Visitors will see the ruler’s living quarters as they were when he was alive. It is a rare treat to view the many trees and marble statutes that decorate the palace, as well as the personal items that the Emperor owned.
Image by Evgeny Gerashchenko on Wikimedia under Creative Commons License.
Sight description based on wikipedia