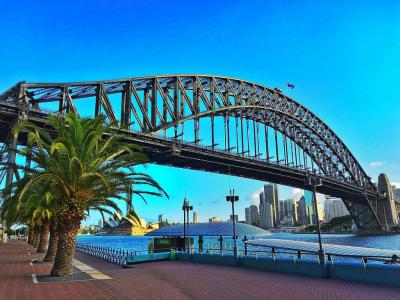 The Sydney Harbour Bridge is the world’s 2nd widest long-span bridge. It connects the city’s Central Business District and the North Shore. It carries rail, vehicle, bicycle and pedestrian traffic. The arched shape of the bridge has earned it the popular name, Coat Hanger.

The Sydney Harbour Bridge and the Opera House are symbols of the city and of Australia. It was built under the supervision of Dr. J.J.C. Bradfield of the New South Wales Department of Public Works and constructed by British firm, Dorman Long and Co. It stands 440 feet high and 503 meters long. There is a pair of granite pylons at each end of the bridge designed by Scottish architect, Thomas S. Tait. The southeastern pylon has a museum and a lookout from which tourists can see beautiful views of the opera house and Sydney Harbour. Today, there are 6 lanes for traffic on the main roadway, two road traffic lanes and a pedestrian pathway on the eastern side and two railway tracks and a bicycle path on the western side.

Since 1998, tourists have been permitted to climb the southern half of the Sydney Harbour Bridge. It is also the venue of spectacular New Years Day fireworks and many commemorative celebrations. It is a monument of national pride in Australia.

Why You Should Visit:
This bridge can provide you with so much entertainment from no to high prices, that it would be a sin to miss it if you're holidaying in Sydney.

Tip:
Try to walk in the early morning, as well as in the afternoon. When the sun is down and all the lights are on, you'll see something different again.
To make your bridge walk even more attractive, go up to the Pylon Lookout – the 360 degrees view from the top will be breathtaking.
If you're fit and capable, go for the bridge climb as well. Not as scary as maybe you think, but a certain adrenalin level makes it even more fun.
Alternately, access the bridge from Cumberland and then run/walk all the way to the north end. The views from Kirribilli of the bridge and the Opera House are outstanding.
Image by Adam.J.W.C. on Wikimedia under Creative Commons License.