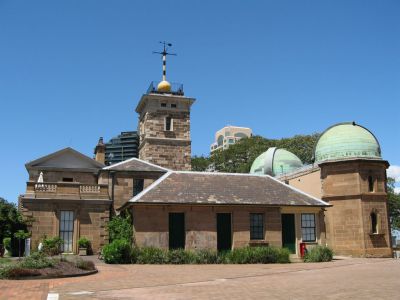 This 140 year old observatory is the oldest in Australia. The Sydney Observatory was designed to preserve the history of the science of astronomy. It is surrounded by serene gardens where visitors can sit and enjoy the view.

The Sydney observatory was first the site of a windmill. Later a fort was built to defend the city from attacks by the French and rebellious convicts. In 1825, the eastern wall of the tower was used to send signals to passing ships. In 1856, government astronomer, William Scott was commissioned to design an observatory adjacent to the signal tower. The sandstone building has an Italianate style designed by architect, Alexander Dawson. At first the main task of the observatory was to tell the time through the Time Ball Tower. At 1.00 pm, the ball at the top of the tower would drop to signal the time to the harbour and the city.

The museum has many old telescopes, sextants and other astronomical objects on display. There is a 3-D space theatre and sky viewing sessions overseen by a professional astronomer. The sessions are held at night and visitors can observe the planets through a state of the art 40cm Schmidt-Cassegrain telescope or an ancient 29 cm refractor telescope built in 1874 which is the oldest functioning telescope in Australia.
Image by Greg O'Beirne on Wikimedia under Creative Commons License.