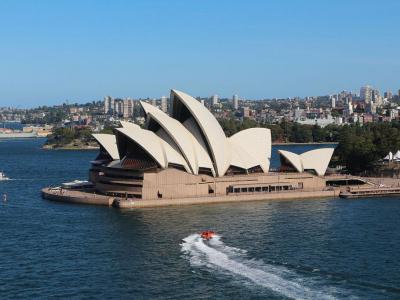 The Iconic Sydney Opera House is one of the largest and busiest performing arts venues in the world. It was declared a UNESCO World Heritage Site in 2007 and nearly 7 million tourists visit the place every year either to attend a performance or to view its architectural splendour.

The Sydney Opera House was designed by Danish architect, Jorn Utzon, who won a design competition in 1957. He received the Pritzker Prize, the highest honour given to architects, in 2003. The design is modern expressionist with a series of concrete shells. It covers 4.4 acres of land and is supported by 588 sunken concrete piers. The material used was mainly from Australia except for the roof of the shells that are covered with white and cream coloured Swedish tiles. The building is surrounded on three sides by the Sydney Harbour.

The Sydney Opera House was opened in 1973 by Queen Elizabeth II. It has seven halls and hosts over 1500 performances each year. It is the home of four performing arts companies, The Sydney Theatre Company, The Sydney Symphony Orchestra, Opera Australia and the Australian Ballet. Two tours, one lasting one hour and the other two hours, take visitors around the opera house, the theatres and backstage.

Why You Should Visit:
Gets more and more impressive the closer you get to it. Well, if you really want to be impressed, then you absolutely have to see the inside, because the outside doesn't do it justice.
The fact that it's on a peninsula overlooking the bridge and the bay is an added bonus.

Tip:
If you're unable to attend a show, do the tour – midweek & midday is best.
Outside, spend some time to sit on the outdoor stairs and enjoy the view!