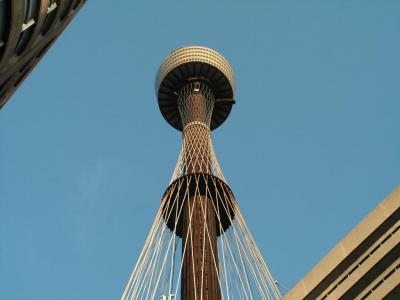 Sydney Tower is a 300-meter tall structure that offers 360-degree views of the city. It is the second tallest tower in the Southern Hemisphere and is a member of the World Federation of Great Towers.

Construction of the Sydney Tower began as a shopping complex in 1970. The tower took ten years to build and was finally completed in September 1981. It is held in place by 56 cables weighing 7 tons each to resist strong gales and earthquakes. The tower is also stabilised by an enormous water tank at the top that holds 162,000 litres of water.

The Sydney tower stands on a 3-floor base that houses a shopping centre and restaurants. Three high-speed Double Decker elevators take visitors up to the top floors in less than 40 seconds. There are two restaurants and a coffee lounge at the top. From the enclosed observation deck, visitors can see sweeping views of Sydney Harbour, the Blue Mountains and the Opera House. There is also a skywalk that involves a walk on a glass-bottomed platform 268 meters above sea level. Skyguides show visitors Sydney landmarks through the glass floor. Two sets of steps serve as emergency exits and an annual Tour Run-Up race is held where participants climb 1304 out of 1504 steps. The event raises money for the Cancer Council.

Why You Should Visit:
To spend at least an hour admiring the view and browsing the gift shop.
Sydney is ridiculously pretty and it's nice to see where everything is in relation to everything else.

Tip:
Don't forget to book online for a cheaper price and also to avoid lines at the ticket counter.
Try coming during the day as you can see all the small islands nearby where they're impossible to be seen at night from the observation deck.
You may skip the Skywalk and go to 360 Bar and Dining, as it's usually less crowded, less expensive and the view is worth sitting down and watch for a while.