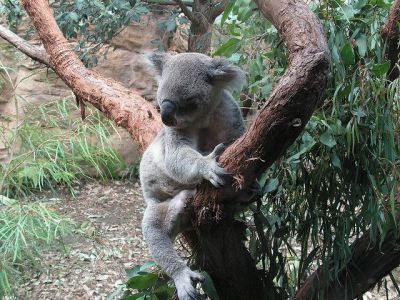 The Sydney Wildlife World is a small zoo located in Darling Harbour as an extension of the Sydney Aquarium. It features over 6000 animals in separate enclosures.

Sydney Wildlife World was constructed between 2004 and 2006. The design drew inspiration from the skeletal frame of a python. Nine ecosystems form part of the unique structure that has a mesh roof supported by steel arches. It houses over 130 native Australian animal species. Visitors feel that they are walking through an animal museum as they make their way through the glass walled zoo. It won the 2007 Best Family Focused Tourism Award. The zoo offers an informative and entertaining experience for visitors of all ages.

Sydney Wildlife World has 10 distinct ecosystems under its roof including semi arid grassland, the Koala sanctuary, the Koala rooftop, Wallaby cliffs, rainforest, reptiles, invertebrates, nocturnal, butterflies and the Kakadu Gorge where a 5 meter long crocodile called Rex resides. The Kakadu Gorge also has fish and bird species from Northern Australia. Native Australian animals are housed in the zoo for public viewing including kangaroos, wallabies, Koala bears and the endangered Cassowary. It also has a range of native Australian plants, full grown trees, vines and creepers.
Image by Joe Brockmeier on Flickr under Creative Commons License.