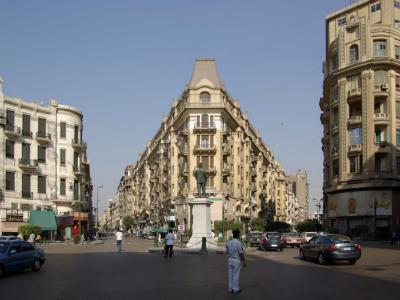 At the opposite end of Talaat Harb Street from Tahrir Square, you'll find Talaat Harb Square, or "Midan Talaat Harb." This area, in the center of the city, is always bustling with activity. Expect heavy traffic and lots of pedestrians enjoying shopping and the cafes along the way.

The square's main feature is the striking statue to the square's namesake, Talaat Harb Pacha. Talaat Harb was an Eqyptian entrepreneur who founded Banque Misr in 1920. The founding of the Egyptian owned bank was a significant step towards establishing Egypt's own identity apart from the colonial powers. Talaat Harb was later instrumental in establishing many businesses in Egypt's private sector, including shipping, movie making, insurance, and the national airline, Egypt Air.

The street and square have been front and center in Cairo life for decades. You'll find many once-famous establishments that have gone out of business. But their presence along the square stands as a testament to their importance. Groppi was a famous tearoom and chocolatier in its heyday, but it is now closed. Café Riche was a meeting spot for the cities intellectuals and revolutionaries, but only the building remains. The Art Deco-designed Metro Cinema is still evident. It opened in 1939 with Gone With the Wind. Now the theater shows low-budget action movies.

The buildings surrounding Talaat Harb Square exemplify the varied history of the nation's colonial past. Buildings here are done in the French neoclassical style. These streets were once home to the city's most successful shops. This part of town was once called "Paris on the Nile," thanks to its nineteenth-century elegance.
Image Courtesy of Wikimedia and Berthold Werner.