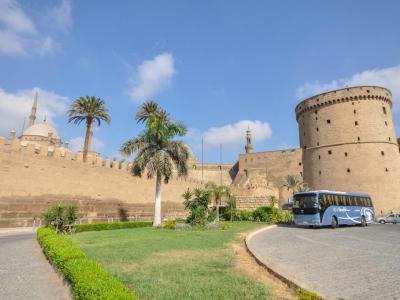 The Citadel, Cairo (must see)

The Cairo Citadel on Mokattam Hill is a large Islamic fortification commanding spectacular views of the city. Many landmark Mosques and museums are located here today.

The Cairo Citadel served as a place where Sultans from the Mamluk Dynasties came for the cool air and to enjoy the spectacular views. It was the Ayyubid Ruler Salah-ad-Din who realized the strategic advantage of fortifying the citadel to protect the city from the crusaders. The wall around the citadel was constructed between 1176 and 1183. It served both as a fortress and a Royal City at the time. The Mamluk Sultan, Al Nasir Muhammad regained power in the 1330s and destroyed most of the Ayyubid structures. Later the Ottoman rulers, tore down most of the Mamluk buildings in the 1800s.

Today, only the walls of the Ayyubid fortress and the Bir Yusuf or St. Josephs Well remain from the original structure. The green domed Mosque of Al Nasir Muhammad and a portion of his striped palace remain from the Mamluk era. All other structures are built by the Ottoman Rulers, in particular Muhammad Ali Pasha the founder of the last dynasty that ruled Egypt. The four museums that are now located within the Citadel are the Police Museum, the National Military Museum, the Carriage Museum and the Al-Gawhara Palace museum.
Image by Jorge Láscar on Flickr under Creative Commons License.