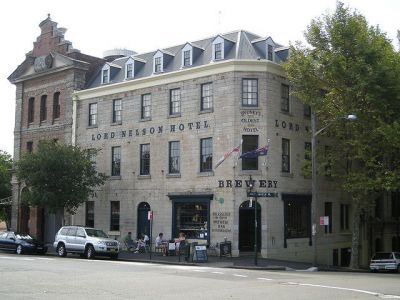 The Lord Nelson Pub is the oldest pub in Sydney, and is a part of Australia’s oldest continuously operating hotel. The latter was established in 1841, although the building itself dates back to 1836. This is one of the few hotels left in the historic Rocks precinct spared from demolition after the plague hit the city at the turn of the 20th century. It has been listed on the New South Wales State Heritage Register since April 1999.

Over the course of more than one and a half centuries, the place has undergone numerous modifications. In 1986, the edifice was restored to its former grandeur and the onsite brewery was incorporated. At that point, the word Brewery appeared on the façade. Another significant upgrade in the 1990s produced the pub that we see today.

Nowadays, The Lord is recognised worldwide for brewing its own award-winning ales, much as for serving moreish fare and offering comfortable boutique accommodation on the upper floor. Adding to the atmosphere inside are the walls hung with tonnes of historical pictures, photos and memorabilia.
Image by Sweet One on Flickr under Creative Commons License.