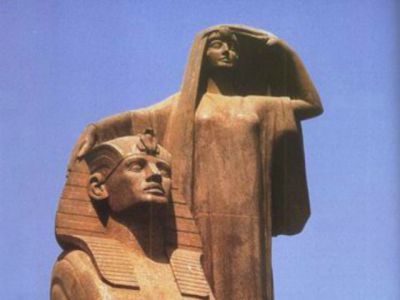 The Mahmoud Mukhtar Museum is dedicated to the works of Mahmoud Mukhtar, regarded as one of the finest sculptors in the country and the founder of the modern art movement in Egypt. It has over 85 sculptures in bronze, stone and plaster, painstakingly worked by Mukhtar.

Mahmoud Mukhtar was a world renowned Egyptian sculptor who wrought many modern landmark monuments of national importance in Egypt. He was born in 1891 in a small village called Nesha in the Nile delta. He moved to Cairo to study at the School of fine Arts and later went to the Ecole de Beaux Artes in Paris. He well known works are the statue called The Nahdet Misr, located in front of the Cairo university bridge and the two statues of Saad Zaghlul that are located in Cairo and Alexandria respectively.

The Mahmoud Mukhtar building was designed by Egyptian architect, Ramses, Wissa Wassef. It has two floors displaying some of his best works. Well known sculptures on display are the Sadness Statue, the Cataract Daughter, Return from the River, the Alkhmasin, To beloved, Secrets Keeper and Murmuring. The museum remained a neglected repository of the works of the famous sculptor until 2003 when it was renovated and opened to the public and international visitors.

This sight is featured in a self-guided walking tour of Cairo, Egypt within the mobile app "GPSmyCity: Walks in 1K+ Cities" which can be downloaded from iTunes App Store or Google Play. Please download the app to your mobile phone or tablet for travel directions for visiting this sight. The app turns your mobile device to a personal tour guide and it works offline, so no data plan is needed when traveling abroad.

It would be a pity to leave Cairo without having explored its specialty shops and bringing home something truly original. We've compiled a list of gifts and souvenirs, which are unique to Cairo, that a visitor might like to purchase to reflect their visit.

Cairo, Egypt, the Triumphant City, is one of the world's most sprawling urban areas and has many tourist attractions. Cairo has been for a long time a political and cultural center. Even before Cairo was founded, in the tenth century, the land integrating the present-day city was the site of national capitals whose vestiges remain noticeable in parts of Old Cairo. Check out the most popular...  view more

Cairo's museums are home to some of the finest Islamic art in the world. Long the seat of great dynasties, whose progeny patronized works of art, Cairo's status as one of the wealthiest and most inhabited cities of the medieval world is reflected in the exquisite arts that make up its museum collections, collections which were expanded in the twentieth century through the purchase of...  view more

Cairo the city of a thousand minarets, known as Al Qahira, is one of the world's biggest urban conglomerates. Cairo is home not only to over 14 million people, but also to the Great Pyramids of Giza, ancient temples, and graves, mosques, churches and markets. In Cairo one can find an impressive number of museums each of them unique in its way, having a rich history and interesting items to...  view more

The beautiful historical mosques of Cairo will impress any visitor. There is a significant variety of them here, dating from the earliest periods of Islam up to modern times. This walking tour will guide you through to the most remarkable Islamic structures in Cairo.