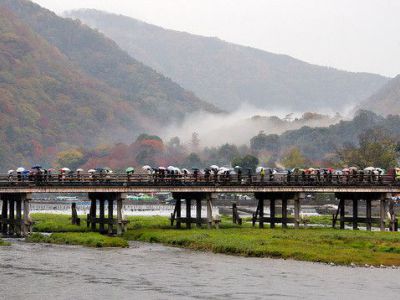 Also known as the "Moon Crossing Bridge", Togetsukyo is right in the center of Arashiyama and straddles the Katsura River in front of Mount Arashi. Its ends are adjacent to the Tenryū-ji Temple/Bamboo Forest on the north end and the Monkey Park at the south end.

With a spectacular backdrop of fall foliage and full-blown cherry blossoms in the spring, this famous landmark was originally built in the Heian Period (794-1185) and was last renovated in the 1930s. Though it looks all wooden from a distance, the columns and beams are made of reinforced concrete and only the parapets use cypress trees.

The poetic name was inspired by Emperor Kameyama who witnessed a by a shimmering moon rising above the surface of the river, appearing as though the moon itself was crossing the bridge. Since then, it has seen feudal wars, hosted samurai battles, and inspired some of the best haiku poems.

You can take photos from different sides and angles, buy souvenirs from the shops at each end, ride a rickshaw along the river banks, have a picnic by the water or a bite from the food stalls and many restaurants nearby. From July to September, you can also experience cormorant fishing in the evenings.

Tip:
A short stroll across the bridge will lead you to a small pier full of rental boats, so jump on a boat cruise if you can!
Image Courtesy of Flickr and KimonBerlin.