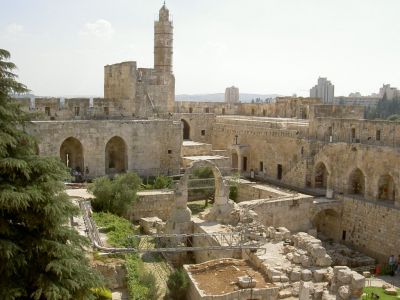 Tower of David, Jerusalem (must see)

The Tower of David is an old stronghold near the Jaffa Gate, and was built to create a sense of security in what traditionally had been a very unfortified part of Old Jerusalem. The structure is named so due to the Byzantine Christians who used to live nearby and believed that this was the original site of the palace of king David.

The tower dates back to the 2nd century BC and, like many other buildings in the area, was destroyed and rebuilt several times – by the Christians, Muslims, Mamluks, and Ottomans. Some of the archaeological findings here are aged almost 3,000 years.

In 1989, the Jerusalem Foundation opened a museum within the tower, recounting a nearly 4,000-year stretch of history, all the way back to the Canaanite period. The top of the tower offers a beautiful full-circle view of Jerusalem. The place is also a very popular venue for concerts, musical shows, craft exhibits and other public events, all of which bring almost 3.5 million visitors to this site each year.

Tip:
A spectacular sound-and-light 45-minute show runs here every night and is worth seeing – just make sure to book early, as it sells out quickly.