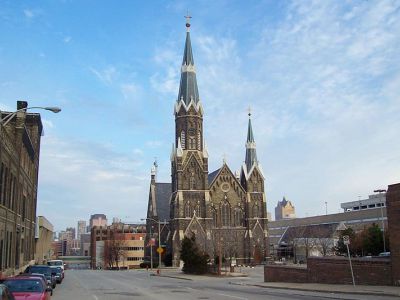 Trinity Evangelical Lutheran Church is listed on the National Register of Historic Places and is a designated State Historic Site. The building was also declared a Milwaukee Landmark in 1967. Trinity's congregation was founded by German immigrants of the Lutheran Church - Missouri Synod in 1847, and is the oldest church associated with the Synod in the city.

Members of the Trinity Church established St. Stephen Lutheran Church in 1853, in order to serve parishioners south of the Menomonee River. These two churches, along with members of St. John's Evangelical Lutheran Church, helped to seed a number of other Lutheran churches in the area.

The building was designed by architect Frederick Velguth in German Romanesque/Gothic Revival style and built in 1878 using Cream City brick, a distinct light colored brick manufactured locally. It features a landmark 200 foot spire and sandstone details on the façade. Notable of the church's interior is the historic Schuelke organ in the rear gallery, containing some 1,600 pipes.

German architecture of this type is typical among the historic structures found in and around downtown Milwaukee, including parts of the neighboring Pabst Brewery complex.
Image Courtesy of Wikimedia and Sulfur.
Sight description based on Wikipedia.