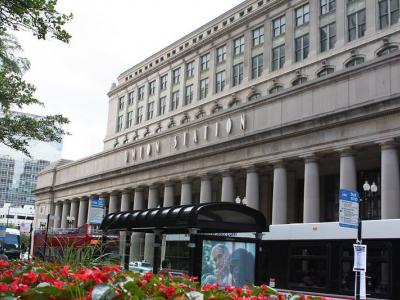 Union Station is a Chicago train station that opened in 1925, replacing an earlier 1881 station, and is now the only intercity rail terminal in Chicago. Union Station was built on the west side of the Chicago River and stands between Adams Street and Jackson Street. It is, including approach and storage tracks, about nine and a half city blocks in size, and almost entirely beneath streets and skyscrapers (only its impressive head house is not). Since the station is underground, exhaust from the trains is a problem which is demonstrated by its dark ceilings.

Upon its completion, Union Station was hailed as an outstanding achievement in railroad facility planning. Today, the monumental neoclassical station is the last remaining railroad terminal still used by intercity trains in Chicago.
Image by Andrew Kalat on Flickr under Creative Commons License.
Sight description based on wikipedia