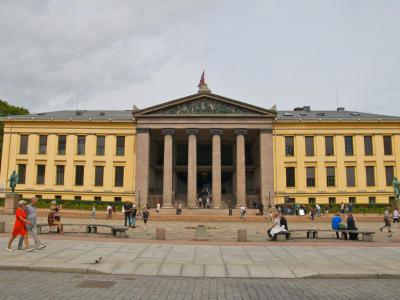 The University of Oslo was founded in 1811. It is the oldest and largest university in Norway, and considered to be one of the world’s hundred best educational institutes. Its central campus is located in the heart of Oslo’s city center, close to the Royal Palace and Stortinget. Whilst many of the modern faculties are now based at a campus outside the center, the neoclassical, Prussian influenced buildings remain. These buildings now comprise the university’s prestigious Faculty of Law.

The university was modeled on those already established in the nearby cities of Copenhagen and Berlin. Originally named after King Frederick, ruler of a unified Norway and Denmark, it only changed its name in 1939. It is informally known simply as ‘universitet’, or ‘the university’. This is understandable, given that it was the only university anywhere in Norway until as recently as 1946.

The university’s main hall was used to host the internationally acclaimed Nobel Peace Prize from 1947 to 1989. It is the only university to have hosted a Nobel Prize ceremony. The institute can also claim five previous Nobel Prize winners amongst its alumni. The campus also hosts cultural and natural history museums, created from the university’s extensive archives and research facilities.
Image by monstermunch99 on Flickr under Creative Commons License.
Sight description based on wikipedia