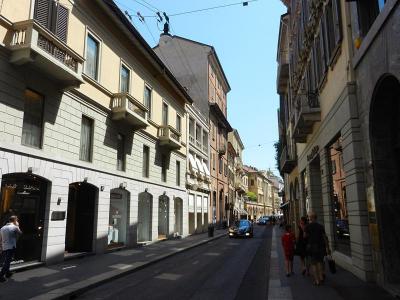 Nicknamed ‘Montenapo’ by the Milanese, this luxurious thoroughfare, with the narrow side streets branching off, is one of the most elegant destinations in Milan; also one of the most stylish and expensive in Europe. As the centermost part of the Milan fashion district (Quadrilatero della moda), Via Monte Napoleone is particularly famous for its ready-to-wear clothing- and jewelry shops. Many distinguished Italian fashion designers and shoemakers, as well as those from other countries, have established their exquisite presence here. Exclusive boutiques, headquarters, major offices or large emporia of several of the world's top fashion brands are found in Monte Napoleone.

Its name dates back to 1804, the peak of the Napoleonic era. Since Milan, a wealthy city of such, had always been at the heart of art and pleasure, sporting gents and their ladies flocked here often, and not only to discuss business. After World War II, Monte Napoleone became one of the foremost fashion destinations, similar to the world's major thoroughfares, like Bond and Oxford Streets in London, Rue du Faubourg-Saint-Honoré in Paris, LA's Rodeo Drive, and New York's Fifth Avenue.

Why You Should Visit:
The fancy part of Milan – fun to browse (temptation is nigh!), and even more fun to watch people.
The local personnel will treat you like a king or queen regardless of whether you buy anything or not.

Tip:
Walking the length of Via Monte Napoleone is definitely worth it. You can walk from it to La Scala in about 10 minutes or you can get to Corso Vittorio Emanuele II and the Galleria for more shopping.
Image Courtesy of Wikimedia and Geobia.