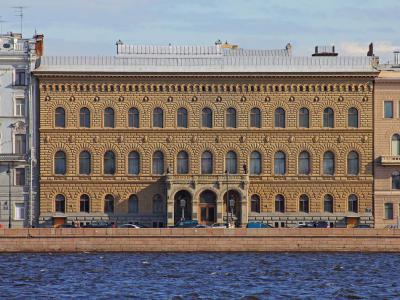 Vladimir Palace is one of the last regal palaces to be constructed in St. Petersburg. Vasily Kenel, Aleksandr Rezanov, Andrei Huhn, Ieronim Kitner, and Vladimir Shreter designed the fortress. The building is located on the Palace Embankment. It was constructed from 1867 to 1872 for Alexander II's son, Grand Duke Vladimir Alexandrovich of Russia. Today, the house is known as the Academics’ House.

The 360 rooms and outbuildings features several design styles from many different influences. Neo-Renaissance, Gothic Revival, Russian Revival, Rococo, Byzantine Style, and Louis XIV, are some of the many influences one will see as they view the many exhibitions. The exterior facade features stucco rustication and the main porch has Bremen sandstone that is decorated with griffins, coats-of-arms, and cast-iron lanterns.

The palace was given to scientists after the October 1917 Revolution and became known as the Academics’ House. This transfer is probably what enabled the palace to survive the Soviet years without losing any of its original design or detail. Visitors will enjoy viewing 19th century porcelain, vases, dinner services, the Main Staircase, the Golden Staircase, the intricate ceiling tiling in the Persian Room, the Monumental Stove in the Oak Hall, and many other stunning displays of design. The palace is open for tours Monday through Saturday.
Image by Alexei Troshin on Wikimedia under Creative Commons License.
Sight description based on wikipedia