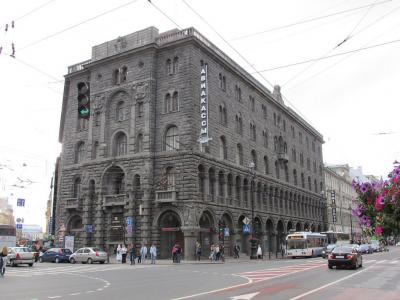 The Wawelberg Bank Building is an important landmark of St. Petersburg, constructed by a prominent Polish-Jewish banker family who settled here in the 1840s. The massive edifice – stretching for an entire city block – incorporates the foundation and elements of two separate 18th century buildings.

Upon its completion in 1912, the building was compared to the Doge's Palace in Venice and the Banco di Santo Spirito in Rome. Despite its dark granite facade, producing a somewhat medieval appearance, many contemporaries considered the building a bit too “American”, if not tasteless.

Aside from the bank, throughout its century-plus history, the Wawelberg Building has consecutively accommodated a retail establishment, a restaurant, an employment agency, and an art studio. For most of the Soviet period, between 1960 and 1992, it was occupied by the regional Aeroflot office; hence the local nick "Aeroflot Building" that is still in use. Today, it houses a collection of travel agencies and cafes. In perspective, there are plans to convert the property into a boutique hotel.
Image Courtesy of Wikimedia and sailko.
Sight description based on Wikipedia.