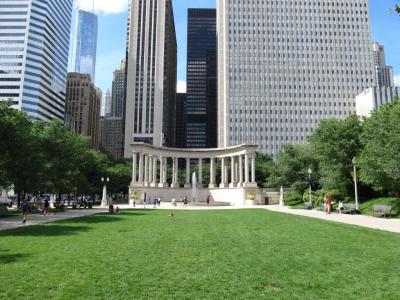 Nestled on the corner of Michigan Avenue and Randolph Street, in the northwest section of Millennium Park, Wrigley Square is a tree-lined, public space serving as an outdoor exhibit and performance space. Inviting to those who seek relaxation with its large lawn, fountain, and stroll paths, the square also has earned a reputation of a vibrant place for cultural events, such as local and international art and photography exhibitions, as well as occasional live music shows.

Anchoring the square is the Millennium Monument (Peristyle), a nearly full-sized replica of the original peristyle that had stood in this part of Grant Park from 1917 until 1953. With its graceful semi-circular row of 40-foot Doric-style columns made of Indiana limestone and set upon French limestone bases, the Millennium Monument ties the past to the present and supports the designation of Michigan Avenue as a landmark district.

As a token of appreciation, etched in stone on the base of the Millennium Monument are the names of 122 founders of Millennium Park – private and corporate donors who supported its design and construction and continue to support the curation of the park's art and architecture. In 2017, the Millennium Monument underwent restoration to include enhanced LED color-changing lighting, new pre-cast concrete elements, and new pavers for the fountain plaza at its base. Both, Wrigley Square and Peristyle have come into being thanks to a gift from the Wm. Wrigley Jr. Foundation.
Image by Ken Lund on Flickr under Creative Commons License.