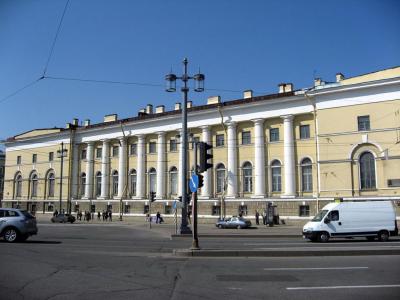 The Zoological Museum of the Zoological Institute of the Russian Academy of Sciences is the oldest zoological museum in Russia, founded in 1832, stemming from the nearby Kunstkamera. In 1896, it moved to its present location in the former warehouse.

It is also one of the ten largest natural history museums in the world. The total number of exhibits on display exceeds 30,000, and the total area is 6,000 m².

In the front hall of the museum, by the entrance, is a monument to Karl Ernst von Baer – the first president of the Russian Entomological Society, as well as skeletons of cetaceans, including the enormous 27-metre-long (89 ft) blue whale, and mounted pinnipeds.

In the gallery above the front hall, the entomological collection is displayed. The second and third halls form a long passage with systematic collections and dioramas dating back to the early 20th century such as “Fur seal rookery”, “Lion pride resting”, "Giraffes in the savanna" and "The Tien Shan Highland". The second hall hosts the collection of fishes, amphibians, reptiles, birds and invertebrates (about 3,000 species), mounted or preserved in formalin, and their skeletons or shells.

The collection of mammals is displayed in the third hall. Here you can see some truly unique exhibits of the already extinct animals, like the Tasmanian wolf (stuffed animal and skeleton), Steller's sea cow (well-preserved skeleton), as well as a rare collection of woolly mammoths: the so-called "Berezovsky Mammoth", mammoth calves (male "Dima" and female "Masha"), and "Mammoth Adams" (the oldest and largest to-date skeleton of a mammoth).

Exhibitions occur on a regular basis. The museum receives thousands of visitors per year and is open Sunday through Saturday from 11 am to 6 pm; Tuesday - closed. Also closed during public holidays.
Image Courtesy of Wikimedia and Dezidor.
Sight description based on Wikipedia.