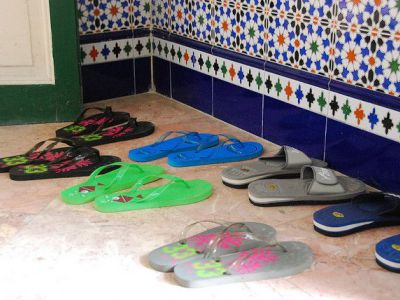 Cuba’s Muslims usually pray in their homes since there is no Mosque in Havana and the state does not allow the construction of mosques. Though former President Fidel Castro was reported to have promised to build a mosque for his country’s Muslims, according to members of the Humanitarian Aid Foundation (İHH) who visited Cuba. The only prayers performed in public are the Friday Prayers that are conducted in a place known as Casa de los Árabes ("The Arab House") in old Havana.

The Arab House belonged to a wealthy Arab immigrant who lived in Cuba during the 1940s, and it was built on Andalusian architectural designs. The House encompasses an Arabic museum, an Arabic restaurant, and the place is used by Muslim diplomats for Friday Prayers. Arab part donated US$ 40,000 for the remodeling of the House, but it is only opened for Friday Prayers, but Cuban Muslims are not allowed to use the facilities, which are only reserved for non Cuban Muslims: tourists and diplomats.
Image Courtesy of Flickr and Paul Keller.
Sight description based on Wikipedia.