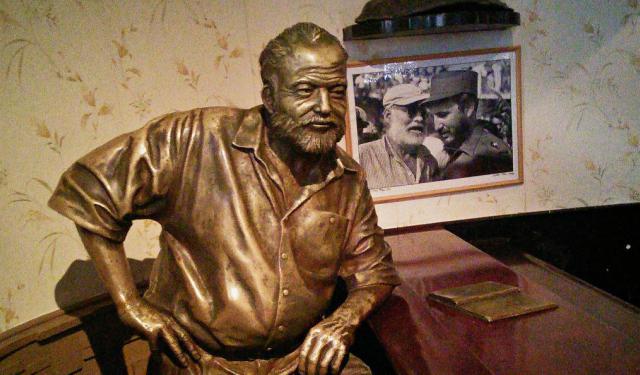 Hemingway was a frequent patron at El Floridita, famous for its daiquiris. Today, you can sidle up to Hemingway's bronze statue at the bar, and join him for one of the frosty rum and lime refreshments. You can also try the famous mojito at Bodeguita del Medio, another of Hemingway's haunts. Search the walls for photos and signatures of Hemingway and other famous visitors.

After moving out of Hotel Ambos Mundos, he bought a home outside of the city, where he wrote The Old Man and The Sea. This novel, about a Cuban fisherman, won the Pulitzer Prize in 1953 and the Nobel Prize in 1954. Upon winning the Nobel Prize, Hemingway said, "This is a prize that belongs in Cuba because my work was conceived and created in Cuba, with my people of Cojimar where I'm a citizen."

Today, visitors seek their own connection with the famous author whose words have resonated with generations of people throughout the world. Travel in Hemingway's footsteps, sit at his favorite bars and find your own Havana connection on this self-guided walking tour.
Image Courtesy of Flickr and Michalis Famelis.
How it works: Download the app "GPSmyCity: Walks in 1K+ Cities" from iTunes App Store or Google Play to your mobile phone or tablet. The app turns your mobile device into a personal tour guide and its built-in GPS navigation functions guide you from one tour stop to next. The app works offline, so no data plan is needed when traveling abroad.

This historic cocktail bar and restaurant opened in 1817. Originally called La Piña de Plata (The Silver Pineapple), the name was changed in the early 20th century to honor the increasing number of Floridians patronizing the establishment.

Constante, a bartender who became the owner of El Floridita, invented the frozen daiquiri. This classic cocktail propelled El Floridita to fame, and the cocktail bar became a gathering place for bartenders looking to perfect the delicious drink. Unlike the sugary concoction found on cruises and in beach bars, the original daiquiri features simple ingredients that are shaken, but not blended. The bar's motto is now "la cuna del daiquiri" (the cradle of the daiquiri).

The daiquiri also attracted famous author Ernest Hemingway. Hemingway would walk from Hotel Ambros Mundos and enjoy lively evenings at the bar. After moving out of the hotel and outside of the city, he drove into town and visited El Floridita.

Other famous visitors include Graham Green, John Dos Passos, and Ezra Pound. Today, visitors will find photos of famous guests, a bust of Hemingway, and a life-size bronze statue of Hemingway seated at the bar. Come here to enjoy live music, exquisite seafood, and of course, an authentic Cuban daiquiri.

Hotel Ambos Mundos first opened in 1925. This famous five-story hotel is located at the corner of Calle Obispo and Mercaderes. The vibrant lobby features art exhibitions and live music. Jazz bands entertain at the piano bar while visitors gather to reminisce about their day and plan out their tomorrow.

Author Ernest Hemingway thought Hotel Ambros Mundos was a good place to write from. Today, the hotel is most recognized for Room 511, where the famous author lived during the 1930s. Hemingway wrote parts of several masterpieces from this hotel. Here, Hemingway finished his 1932 novel Death in the Afternoon, and started Green Hills of Africa in 1935. Hemingway also began To Have and Have Not (1937) and For Whom the Bell Tolls (1939) from Room 511.

Today, the hotel keeps the author's memory alive and present. Room 511 is set up as a small museum and features several of Hemingway's belongings. The hotel's restaurant, Plaza de Armas, serves some of Hemingway's favorite dishes. After you've finished writing your inspired Instagram post, blog, or a great novel, head up to the Roof Garden and enjoy the expansive views of the city.
Image Courtesy of Wikimedia and Ajay Suresh.
3

Celebrities have inscribed their signatures on the walls, and the decor includes black and white photos of famous guests. Live Cuban music adds to the cozy ambiance.

This used to be another of Hemingway’s favorite bars and he often came here to enjoy his mojitos. While a signature on the wall is signed by "Ernest Hemingway," the authenticity of the quote and signature has been contested. Regardless, this bar still has some of the best mojitos in Havana and it is a place to see and be seen.

Today, you can stop by for a traditional mojito and savory Cuban food, but be prepared to wait for a table at this popular spot.

Operation hours: Monday - Saturday 09:00 am - 19:00 am
Image Courtesy of Wikimedia and Pedro Szekely.