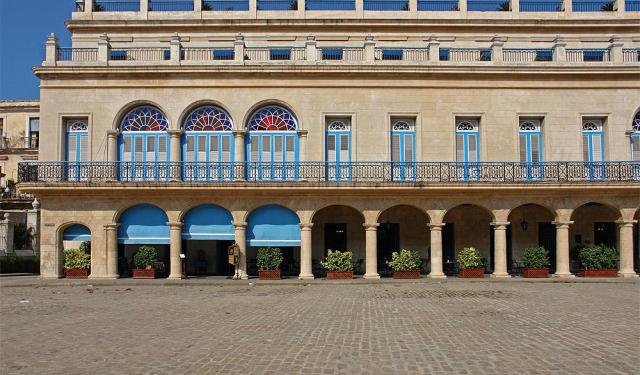 Start your trip with the ornate Presidential Palace, whose interior decoration was entrusted in the 1920s to Tiffany’s of New York. Following the Cuban Revolution, the three-story palace was converted into a museum still commemorating the event.

The somber yet stately Palace of the Captains-Generals was completed in 1791 and became the early seat of the Cuban government, as well as Havana’s city hall. Now housing the City of Havana Museum, the structure contains the breathtaking Throne Room, made for the king of Spain but never used, as well as a statue of Christopher Columbus in its courtyard.

To ensure your trips ends on a high note, visit the distinctive Palacio Cueto – Havana's finest example of Art Nouveau, dating from the early 1900s.

Take this self-guided walk and find out why Havana's palaces are one of the greatest cultural legacies that the Spanish Empire left in Cuba!
Image Courtesy of Wikimedia and BAS aka An Sophie & Bart.
How it works: Download the app "GPSmyCity: Walks in 1K+ Cities" from iTunes App Store or Google Play to your mobile phone or tablet. The app turns your mobile device into a personal tour guide and its built-in GPS navigation functions guide you from one tour stop to next. The app works offline, so no data plan is needed when traveling abroad.

1) Presidential Palace / Museum of the Revolution

The Museum of the Revolution (Museo de la Revolución) is housed in what was the "Presidential Palace" of all Cuban presidents from Mario García Menocal to Fulgencio Batista. The building was the site of the Havana Presidential Palace Attack (1957) by the Directorio Revolucionario Estudiantil, and became a museum during the years following the Cuban Revolution of 1959.

The palace was designed by Cuban architect Carlos Maruri and Belgian architect Paul Belau (who also designed the Centro Gallego, presently the Gran Teatro de La Habana) and was inaugurated in 1920 by President Mario García Menocal. The building has Neo-Classical elements and was decorated by Tiffany Studios of New York City.

The museum's Cuban history exhibits are largely devoted to the period of the revolutionary war of the 1950s and to the country's post-1959 history. Portions of the museum are also devoted to pre-revolutionary Cuba, including the 1895-1898 War of Independence waged against Spain.

Why You Should Visit:
To get a well-done history lesson on the Cuban Revolution. Basic displays (photos, uniforms) are laid out chronologically with reasonable English descriptions. Admission also includes the "Granma" yacht and some of the vehicles used during the Revolution and in the different crises that arose in the '60s.
The building itself is very grand and an important part of Cuban history, which alone makes it worth the visit. Highlights include the Salón de los Espejos – a replica of the Hall of Mirrors in the Palace of Versailles or the Salón Dorado (Golden Hall) which is made of yellow marble.

Tip:
Go early, wear good walking shoes and be discreet with your cell phone.
Be sure to go to the old ballroom and step out on the balcony for great views of the harbor.

The Velasco-Sarra Palace was built in 1912 and remained in the Velasco family until 1960. Jose Sarra arrived from Barcelona in 1853 and built a pharmacy business that grew into the world's second-largest pharmacy. Ernesto Sarra, Jose's wealthy grandson, built the palace in 1912 for his daughter upon her marriage to Dioniso Velasco.

This Art Nouveau-style palace is stunningly ornate and imposing. The first floor features gorgeous, elaborate arches. Intricate bas relief statues decorate each corner. Each second and third-floor window is decorated with a large, overhanging balcony. The tall building can be seen from nearby streets; it's stunning when lit up at night.

Built in 1741, this palace is located right next to the Catedral de San Cristóbal de La Habana, in Old Havana, complementing the extraordinary set of colonial buildings in the Cathedral Square. It's a typical large colonial house that was inhabited by descendants of the first settlers of Havana, the Pedroso family, but the building takes its name from Count Lombillo who married to one of the family's descendants at the end of the 19th century. During 300 years it was submitted to remodeling and additions up to its precious current condition.

Remarkable lawyers like Doctor Ricardo Dolz, the Escuela Municipal de Música (Municipal School of Music) or the secretaría de la Defensa Nacional (National Defense Secretary) found their place in this magnificent palace. In the past, it also served as a post office and as a Museo de Pedagogía Cubana (Museum of Cuban Pedagogy). From 1947, it was the headquarters of the Archivo Histórico Municipal Habanero (Havana Municipal Historical Archive), the Biblioteca Histórica Cubana y Americana (Cuban and American Historical Library), the el Museo de la Ciudad de la Habana y las Publicaciones (Museum of the City of Havana and the Publications). At present, it is completely restored and has once again become the headquarters of the Office of the Historian of Old Havana.
Image Courtesy of Wikimedia and Андрей Бобровский.
4

Erected around 1770, when it was designed as the city post office, the Palacio del Segundo Cabo (Palace of the Second Lieutenant) became the headquarters of the Spanish vice governor-general, then later, after independence, the seat of the Senate. The building reopened in 2016 as a multifarious Center for Interpretation of Cultural Relations between Cuba and Europe. The architectural uniqueness of the baroque palace is shown in its courtyard, which is amazing in its detail.

The tour of the cultural center, interspersed with the technological elements of an interactive museum, highlights various facets of Cuba and Europe's interwoven history, making a visit here very special indeed. Spread over two floors, the interconnecting rooms include a timeline 'tunnel', a couple of cube-activated screens broadcasting different elements of Cuba's history, an interactive trajectory of Cuban-European musical forms, and a comparative study of the architectural development of Havana and Barcelona. Aided by EU funding, it's the best new museum in Havana for a long time..

The Museum of the City of Havana is housed in the old Palace of the Captains General. This Cuban baroque-style mansion was built in the 1770s and fills the entire western side of Plaza de Armas.

The gorgeous courtyard is full of trees and peacocks. An 1862 white marble statue of Christopher Columbus stands in the center of the courtyard.

The Salón del Trono (Throne Room) features a throne prepared for a visit from the King of Spain. The visit never happened.

Tip:
Make sure that you buy a ticket that shows all the exhibits.

Belonging to the count of Santovenia (famous for hosting elaborate parties, most notoriously a three-day bash in 1833 to celebrate the accession to the throne of Isabel II that climaxed with the ascent of a gaily decorated gas-filled balloon), the palace was converted into a hotel in the second half of the 19th century, hence becoming one of Cuba's oldest hotels. The former royal building was taken care of, receiving a renovation in the early 1990s, and is today maintained in very good condition. Jimmy Carter, former U.S. president, visited in 2002.
Image Courtesy of Wikimedia and Velvet.
7

Referred to as Havana’s finest Art Nouveau example, Palacio Cueto is one of the masterpieces of Arturo Márquez. Finished in 1906, it displays Gaudí-esque details and the richly-ornate facade (featuring griffins, satyrs and other mythical figures) distinguishes it from all of the other surrounding buildings. Originally, it was a storage and hat factory until the 1920s when it was leased by José Cueto, who turned it into the Palacio Viena Hotel, later to be converted into an apartment building. Empty and unused since the 1990s, it is currently being restored as a deluxe hotel by the City Historian’s Office in a stop-and-start renovation that has been ongoing for many years.
Image Courtesy of Flickr and Esteban De Sousa.