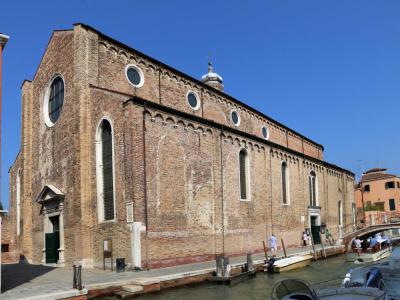 This church was edified in 1348 along with a Dominican convent and was originally dedicated to St. John the Baptist. In 1474 a fire razed it to the ground and in 1511 it was rebuilt to the current appearance. It was closed in 1806, a few years after the fall of the Republic of Venice, and reopened in 1813. It is currently one of the two main parish churches in the island of Murano.

Artworks in the church include a Baptism of Christ attributed to Tintoretto, in the right nave, which also houses two works by Giovanni Bellini: an "Assumption with Saints" (1510–1513) and the Barbarigo Altarpiece (1488). Palma il Giovane's "San Nicòlo, Santa Lucia, San Carlo Borromeo" also features on the right wall. The Ballarin Chapel in the right wing was built in 1506 after the death of the eponymous glassmaker from Murano.