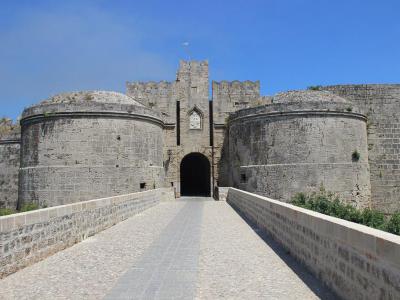 Set in the North West corner of the Medieval City of Rhodes, the imposing D’Amboise Gate is undoubtedly one of its most remarkable – from a military standpoint – structures. The gate represents a hugely fortified path with two gigantic round towers set to fend off any attack. Although the Ottomans eventually did manage to pass through it, they still couldn’t enter the city right away, as the knights had modified the fortification so that three more gates, specifically added nearby, also had to be cleared in order to get in.

The D’Amboise Gate is found near The Palace Of The Grand Masters, and bears the name of Grand Master Emery d’Amboise (1503-1512), in whose charge it was built in 1512. Although the actual construction started under his predecessor, Grand Master d’Aubusson (1476-1503), whose initial idea was to incorporate two earlier gates in this place, namely those of the Overseer and St. Anthony.

Proportionate to its vital role – defending the highly important yet vulnerable entrance from the west, along with the nearby Palace, – the gate features a number of sizable halls for the guards. Niched above its arched entrance is the image of an angel brandishing the coat of arms of the Order, as well as that of the House of d’Amboise, along with the inscription “D’AMBOISE M. DXII (1512)”.

Amid the havoc sown by the devastating earthquake of 1513, Grand Master del Carretto (1513-1521) commissioned reconstruction of the gate that was completed under the last Grand Master of the Order on the island, Villiers de l’Isle-Adam (1521-1522). As the most elaborate piece of fortification in Rhodes, D’Amboise Gate bears witness to the opulence and power of the Order preceding the Ottoman invasion in 1522.
Image by Vadim Indeikin on Wikimedia under Creative Commons License.