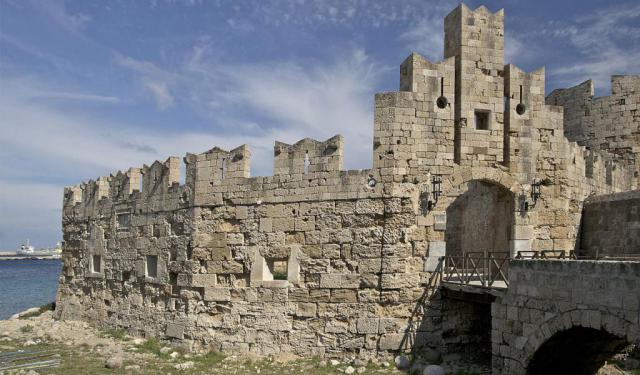 Image by Jebulon on Wikimedia under Creative Commons License.

The medieval walled city of Rhodes has been on UNESCO's list of World Heritage sites since 1988. Encircled by huge medieval walls, when you enter the city, you find yourself in a completely different world. Access to the city is provided by eleven gates, although not all of them are open to the public. Take this tour to explore the historical gates, towers, and walls of Rhodes, one of the best-preserved medieval cities in Europe.
How it works: Download the app "GPSmyCity: Walks in 1K+ Cities" from iTunes App Store or Google Play to your mobile phone or tablet. The app turns your mobile device into a personal tour guide and its built-in GPS navigation functions guide you from one tour stop to next. The app works offline, so no data plan is needed when traveling abroad.

Eleftherias Gate is located in front of Simi Square and is one of the most popular gates among visitors of the city. This gate connects the medieval part of town with Mandraki Harbor. The gate was created after WWII by the Italians, who considered themselves as liberators of Rhodes. The Italians named the structure Freedom Gate.
Image by Melinda Mária Orbán on Flickr under Creative Commons License.
2

St. Paul Gate is located on the northern end of Rhodes. It is protected by a tower and a low wall. There is a relief depicting Saint Paul at this site. The relief was provided by Grand Master d’Aubusson. Be sure to visit this beautiful historic gate.
Image by Karelj on Wikimedia under Creative Commons License.
3

The Temple of Aphrodite is located on Symi Square in front of the Eleftherias Gate in Rhodes. It dates from the third century BC and was built in honor of Aphrodite, the goddess of love and beauty according to Greek mythology. Today a fence surrounds the ruins the former ancient temple. Although you cannot enter the temple complex, an information board provides the layout of the temple. You can also view it from behind the fence to get a glimpse of its former glory.
Image by Wknight94 on Wikimedia under Creative Commons License.
4

Tarsanas (Arsenal) Gate is located not far from the Aphrodite Temple in Rhodes. It serves as the exit from Old Town to the Commercial Harbor. The name Arsenal comes from the fact that this was the spot where knights used to carry their guns and other military equipment.
Image by Vadim Indeikin on Wikimedia under Creative Commons License.
5

Arnaldo Gate is located south of Tarsanos Gate in Rhodes. This gate provides an exit to the Commercial Harbor. The entrance is surrounded by a variety of shops selling items such as carpets, pictures and more.
Image by Aga Khan on Wikimedia under Creative Commons License.
6

Marine Gate is a medieval gate constructed in 1478. It is the main entrance from the harbor to the city. If you are arriving by sea, you will enter Rhodes through this imposing gate. Therefore, it is also sometimes referred to as the Sea Gate.

Grand Master Pierre d'Aubusson built the gate to imitate the Gate to Villeneuve-lès-Avignon in France, which is 200 years older.

The front of the gate features several reliefs. One relief shows the Virgin holding the Christ. Additional reliefs show St. John the Baptist, St. Peter, the coats of arms of France, the Order of St. John, and the blazon of the House of d'Aubusson.

On the interior side of the gate, visitors will see more relief work. An effigy shows an Angel with the coats of arms of the Order of St. John and another blazon of the House of d'Aubusson.

The towers have a series of devices that poured boiling oil on attackers. The gate is so close to the harbor that it would be impossible for an army of any size to gather below the gate and attack it.

This iconic and imposing landmark sets the scene for the rest of Rhodes. It was restored in 1951 when damage to the north tower from World War II bombings was repaired.


Image by Joe Ross on Flickr under Creative Commons License.
7

St. Anthony’s Gate is located not far from D'Amboise Gate. It is a popular historic gate that became the last part of D’Amboise Gate when the knights modified the wall's design. The entry is narrow, and there is a relief above the entrance.
Image by Richard Hughes on Flickr under Creative Commons License.
8

One of the most remarkable gates from a military perspective in the medieval town of Rhodes is definitely D’Amboise Gate. It was built by Grand Master Emery D’Amboise in 1512. The gate was fortified with two impressive round towers to protect the city from the Ottomans. Even if the Ottomans did manage to enter this gate, they still couldn’t access the town. Knights modified the wall's structure so that there were another three gates to pass in order to enter the town.
Image by Vadim Indeikin on Wikimedia under Creative Commons License.