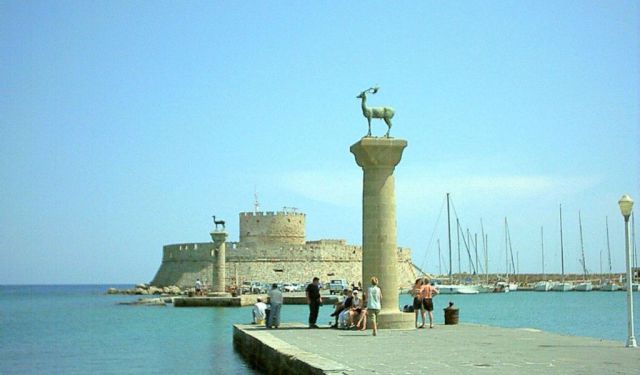 Image by Wojsyl on Wikimedia under Creative Commons License.

Mandraki is one of the three harbors in Rhodes. It is famous, because it is believed that the great statue of Colossus, one of the Seven Wonders of the Ancient World, once stood at the harbor entrance. Today the deer sculptures at the entrance, the St. Nicholas Fortress and a number of medieval windmills create a charming view of the harbor. Many boat trips to other nearby islands leave from here. You can explore this beautiful historical harbor and see the location many believe where the Colossus used to stand on by taking this self-guided walking tour.
How it works: Download the app "GPSmyCity: Walks in 1K+ Cities" from iTunes App Store or Google Play to your mobile phone or tablet. The app turns your mobile device into a personal tour guide and its built-in GPS navigation functions guide you from one tour stop to next. The app works offline, so no data plan is needed when traveling abroad.

Evangelismos Church (also called The Church of the Annunciation) is located next to Mandraki Harbor. It was built in 1925 by the Italians, as Rhodes was an Italian city at that time. The church is a magnificent example of Gothic architecture. It is similar in design to St. John Church located in Old Town. This church is also dedicated to St. John. The interior is decorated with murals by Fotis Kontoglou.
Image by Bernard Gagnon on Wikimedia under Creative Commons License.
2

The Main Post Office in Rhodes is a beautiful building located in Liberty Square, known locally as Plateia Eleftherias, in the modern city. It may not be one of the oldest constructions on the island, but its impressive Renaissance Eclecticism architectural style is nonetheless beautiful and worthwhile visiting. The Main Post Office was built during the first years of the Italian reign over the island, between 1912 and 1943. The post office was designed by Italian architect Florestano di Fausto. It has always maintained its function as the principal post office on the island, initially, under the Italian and, more recently, under the Greek postal service.

The façade is highly stylized and features impressive carvings and engravings into the local poros stone. Above the grand entrance there is an emblem of the god of sun and there are entrances to either side. The Main Post Office, like many of the buildings constructed during Italian sovereignty, were deliberately opulent in order to emphasize the superiority of the Italian reign, as well as to attract tourists to the new part of the city of Rhodes. The Main Post Office is open daily between 8:30am and 2:30pm.

Image by Bernard Gagnon on Wikimedia under Creative Commons License.
3

New Market Hall is located opposite Mandraki Harbor. It is a long, white building with a magnificent entrance. The ground floor of the market houses a number of cafes and bars, and there are an array of taverns, shops and cafes located in the open area. Tourists like shopping at this market, as there are a lot of jewelry and gift shops here.
Image by Böhringer Friedrich on Wikimedia under Creative Commons License.
4

4) Mandraki Harbor and Windmills (must see)

Mandraki Harbor has been a port since ancient times. The Knights of Rhodes moored their fleet in this harbor. Today, the harbor is home to modern yachts.

The harbor has a 400 meter (1,312 foot) long breakwater jetty. Fort St. Nicholas stands at the end of the jetty and protected Rhodes from initial assaults.

Visitors will find three iconic medieval windmills on Mandraki Harbor's jetty. These ancient windmills used to grind grains brought from vessels that moored in the harbor. There used to be more windmills, possibly 13 or 14. Now only three remain, and they have been extensively renovated and offer a popular photo opportunity.

The windmills are silhouetted at dawn and provide spectacular sunrise photos.


Image by BIG ALBERT on Flickr under Creative Commons License.
5

The imposing St. Nicholas Fortress is located in the Rhodes Old City looking out over Mandraki Harbor. In ancient times Mandraki Harbor was a military space and in the 15th century a guard tower was constructed there on the orders of Grand Master Raimondo Zacosta.

Following the first siege, the tower was fortified. A bastion was added by Grand Master d’Aubusson and the newly formed fortress was named after the chapel inside it. It was largely thanks to the fortress that the Knights Hospitaller were able to fend off attacks from the Turks for so many years. Major sieges by the Turks were mounted in 1480 and 1522-23. The initial attack was thwarted, but the Turks ended up seizing Rhodes in 1522 and the Knights were forced to leave the city.

When the fortress was built, it took into account the Ottoman's use of cannons and other siege weaponry and its thick walls were impermeable for many years. Indeed considering their age, they are in excellent condition to this day. The fortress is hugely popular with visitors these days and it has been well preserved. You can walk along the path of the former moat, which has been dried out and provides a scenic, tree lined walking path.
Image by Marc Ryckaert (MJJR) on Wikimedia under Creative Commons License.
6

Sculptures of Rhodian Deer, a stag and a doe, stand on slim columns on either side of the Mandraki Harbor entrance. It is believed that the statue of Colossus once stood here. Today these two charming Rhodian deer sculptures serve as the guardians of the harbor.
Image by INDALOMANIA on Wikimedia under Creative Commons License.
7

The Colossus of Rhodes was a statue that represented the Greek sun-god Helios. It was known as one of the Seven Wonders of the Ancient World and was erected by Chares of Lindos in 280 BC. It was constructed to memorialize Rhodes' successful defeat of Demetrius Poliorcetes, who attacked Rhodes for a year.

Literary references, including Shakespeare's Julius Caesar, describe the statue as straddling the harbor entrance. Ships would enter by sailing between the statue's legs. However, modern analysis proves that this theory was impossible. It was impossible to build the statue over the entrance with the available technology. If the statue had straddled the entrance, it would have permanently blocked the entrance when it fell. We know that the statue fell onto the land.

It is thought that the original statue was 33 meters (108 feet) high. Unfortunately, it was damaged during a 226 BC earthquake. Ptolemy III offered to finance reconstruction; however, the oracle of Delphi warned against reconstruction.

The remains of the statue were still impressive, and many traveled to Rhodes to view it. Unfortunately, the statue was totally destroyed in 653 when an Arab force captured Rhodes. Stories recount that the statue was melted down, and it took 900 camels to carry the load away.

The location of the statue is disputed. However, many believe that it stood where the current columns with the bronze stag and deer stand.
Image by Dencey on Wikimedia under Creative Commons License.