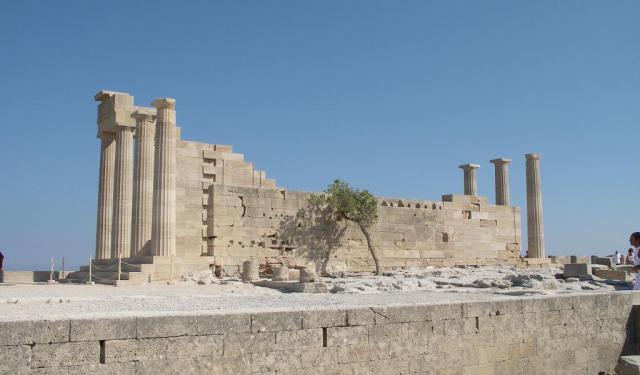 Acropolis of Rhodes (Self Guided), Rhodes

The Acropolis is located on Monte Smith in the city of Rhodes. Structures at this site date back to the Hellenistic period (3rd to 2nd century BC). The partially renovated structures at the Acropolis include the Temple of Pythian Apollo, the Stadium, the Odeion and the Nymphaia. The excavations and restoration work began during the Italian governance of the island (1912-1945) and continue today. If you would like to discover the charm and beauty of the ancient Greeks at the Acropolis of Rhodes at your own pace, take this self-guided walk.
Image Courtesy of Flickr and Shadowgate.
How it works: Download the app "GPSmyCity: Walks in 1K+ Cities" from iTunes App Store or Google Play to your mobile phone or tablet. The app turns your mobile device into a personal tour guide and its built-in GPS navigation functions guide you from one tour stop to next. The app works offline, so no data plan is needed when traveling abroad.

The Rhodes Stadium is located to the west of Rhodes Town on Monte Smith Hill and was constructed in the 2nd century B.C. Under the Hellenistic influence on Rhodes, the locals took on the Greek gods and there are the remains of the temples of Zeus, Athena, Apollo and Helios above the ancient Stadium of Rhodes.

Originally the Stadium was built to be used in events relating to the Cult of Apollo and, it is thought, for the Rhodian School of Rhetoric. Today, the Stadium has been restored and is sometimes used for musical or theatrical performances. It seats 800 spectators and measures 200 meters by 35 meters.

The Stadium was of sacred importance to the ancient Rhodians. It was believed that when Zeus divided up the lands among the gods, Helios, the god of Sun, was absent. When he returned Zeus decided to offer him the first land that sprung up from the sea. Just as he made this promise to Helios, a lush green island emerged from the waters and was bathed in light. Helios, therefore made the patron god of Rhodes. As you stroll around the Stadium and Acropolis you can imagine ancient Rhodians performing their dramas and from the top of the Stadium. The view of Rhodes Town from the Stadium is impressive.

Image Courtesy of Wikimedia and Tango7174.
2

The Italian School of Archaeology at Athens excavated ancient ruins during the early 20th century. This excavation unearthed the Acropolis of Rhodes and found several treasures, including the Odeon.

The Acropolis site dates back to the Classical Greek and Hellenistic periods, from the third to second centuries BC. In 408 BC, three of the island's cities joined forces to build one main city, Rhodes. The Acropolis was built on the city's highest point, and the monuments were built on terraces.

The Acropolis looks over the medieval town and the modern new town.

The small white marble Odeon could hold about 800 spectators. Historians believe the Odeon was used for musical performances and lectures. Ancient Greeks might have attended singing events, musical shows, or poetry recitals here.

The restored theater contains 800 marble seats. The Odeon has been beautifully and painstakingly restored and is a wonderful tribute to ancient Greek architecture.

Image Courtesy of Wikimedia and Tango7174.
3

The Temple of Pythian Apollo is part of the fabulous Acropolis excavation work completed in Rhodes. The Greek Archaeological Service continued the work started by the Italian School of Archaeology at Athens. The Greek Arcaelogoical service started working on restoring the Temple of Pythian Apollo in 1946. Unfortunately, the temple suffered heavy damage from WWII bombs. In addition, it was damaged by the weight of artillery that was installed there.

The Temple of Pythian Apollo, along with the other Acropolis sites, dates to the Classical Greek period and the Hellenistic Period, from the third to second centuries BC. The Temple of Pythian Apollo is on the southern part of the hill and is smaller than other temples on the site. Pythia was Apollo's Priestess, who gave oracles, divined the future, and was consulted before all major decisions.

Today, only a few columns and ruins remain. However, the location at the summit of the Acropolis provides wonderful views of old Rhodes and the sea below.
Image Courtesy of Wikimedia and Jebulon.
4

The Nymphaia is located to the south west of the Stoa and at the northern edge of the Acropolis. It consists of four caverns chiseled into the earth with passages interconnecting the subterranean spaces. Within the caves there are grottoes where statuettes were placed along with water cisterns that connected to the underground aquaducts. Green spaces at the entry area of the Nymphaia were used as a place for quiet reflection and worship during Hellenistic times in ancient Rhodes.

In the ancient Greek religion, there was a strong belief in nymphs, which were supernatural female water sprites. Nymphaia, such as that found here on Rhodes, were constructed in natural grottoes and usually had water associated with them - as was the case at this site. They were generally dedicated to a particular water nymph, although it is not known exactly which nymph the Rhodes Nymphaia was built for.

The Nymphaia, along with the rest of the Acropolis, is an open air site and is open at all times. Wandering the Nymphaia and exploring its caves is a great way to escape the heat. The Nymphaia a peaceful place to reflect on how life must have been millennia ago on the island of Rhodes.
Image Courtesy of Wikimedia and Максим Улитин.
5

The Acropolis of Rhodes, located three kilometers from Rhodes Town, was an impressive complex in its day, if its remains are anything to go by. One of the areas within the Acropolis, that is preserved for modern visitors, is the Stoa Building, built towards the end of the third century BC.

Back in classical times, the Stoa Building would have been truly impressive and it was so big that it could clearly be seen in Rhodes’ lower town and harbor. A Stoa was a common building design in Ancient Greece and consisted of two long rows of columns with a roof resting on top and supporting walls at either end.

The Stoa Building at Rhodes has not survived intact, but many columns and the floor plan can still be seen to this day. It is 87 meters long with 42 columns in total and the middle of the supporting wall was cut for a grand staircase to meet it.

Following the original construction, the ancient Rhodians extended the building out and included two large, underground cisterns to collect rainwater from the Stoa roof and propylaea staircase. It is thought that the large building was used for market stalls and to provide a place for public events or shade from the burning sun.
Image Courtesy of Wikimedia and Manfred Werner (Tsui).
6

The Temple of Athena Polias and Zeus Polieus is located at the northern edge of the Rhodes Acropolis. As well as being an important location for worship it was also where important treaties and documents were stored during Rhodes Hellenistic age.

The building was a Doric peripteral columned temple, with a columned portico on all sides. It was originally a monumental building and the remains that you see today still give an indication how splendid it must have been in classical times. Column drums and an architrave can still be seen – the larger column drums are 1.20m in diameter and the smaller column drums measure 1 meter across. The temple was bounded by the Stoa building to the east.

Inscriptions, found at the site, show that the temple was used for both the worship of the goddess Athena as well as Zeus. Some statues of Athena have been found at the site. It is thought by scholars and archaeologists that the temple predates the Stoa Building and was constructed in the 4th century B.C. Sometime, during the 5th and 6th century A.D, a Christian church was built on top of the original Athenian temple and, during medieval times, there was a monastery added.
Image Courtesy of Flickr and Irene.