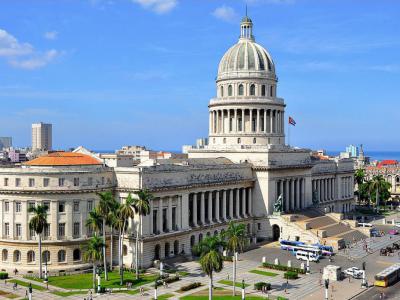 El Capitolio, or the National Capital Building, is one of the most visited and photographed buildings in Havana. It was completed in 1929 under the Gerardo Machado administration. El Capitolio is located in the exact center of Havana. The Congress convened here until the 1959 Cuban Revolution. After that, the building fell into disrepair. In 2013, the government began repairs to restore the building.

El Capitolio is very similar to the U.S. Capitol, but El Capitolio is one meter higher, longer, and wider. The cupola, or dome, was inspired by the French Pantheon. At 92 meters (302 feet) high, El Capitolio's dome was the third-highest dome in the world when it was built.

There are 56 steps up to the main entrance. The steps are flanked by two six and a half meter (21 foot) tall statues. After climbing the steps, visitors will be greeted by twelve 14-meter (46-foot) tall columns decorating the central portico. The entrance has three large bronze doors with detailed bas relief plates. Entering the main hall, visitors will find the Statue of the Republic. At 15 meters (49 feet) tall, this gold-plated statue is the third tallest indoor statue in the world.

The exact center of Havana is marked with a replica diamond. The original 25-carat diamond was stolen in 1946. After it was recovered, the original diamond did not return to public display.

The formal gardens surrounding El Capitolio were designed by Jean-Claude Nicolas Forestier, who designed the park next to the Eiffel Tour in Paris.

It's impossible to visit Havana without a visit to El Capitolio. The building dominates the landscape. As it is the center of Havana, locals give directions based on distances from El Capitolio. Visiting El Capitolio will orient you to the rest of the city. Admire the beautiful architecture and learn more about Cuba's history.

Visit in the day to admire the details and take a tour of the interior in Spanish or English. Return at night to admire El Capitolio stunningly lit up.