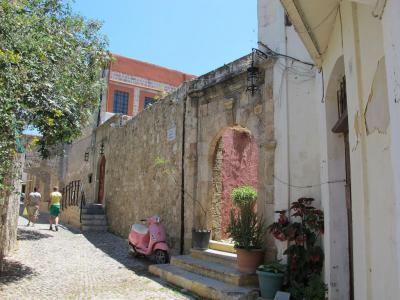 The Kahal Shalom Synagogue is a Sephardic Jewish synagogue located in the Jewish Quarter of the city. There have been Jewish people in Rhodes for more than two millennia and, although they were often persecuted under the Romans and Knights of Rhodes, they enjoyed peace and prosperity under Ottoman rule and this encouraged even more Sephardic Jews to settle here.

Built in 1577, the Kahal Shalom is Greece’s oldest surviving and continuously used synagogue. However, much of the local Jewish community emigrated following the Italian take over the Dodecanese Islands in 1912, especially during the fascist era.

The layout of the building is typical of most Sephardic synagogues with the Tevah, where the Torah is read, in the center of the sanctuary. The striking floor of the interior space is a mosaic made of black and white local stones and there are two unusual Torah arks on each side of the interior courtyard.

There are several plaques relating to the history of the Jewish community, adorning the walls of the interior and exterior of the synagogue in Ladino, the Sephardic language, Hebrew and even French. There is a museum attached to the synagogue, which highlights the history of the Jewish people in Rhodes. The complex is also often used for community events.
Image Courtesy of Wikimedia and sailko.