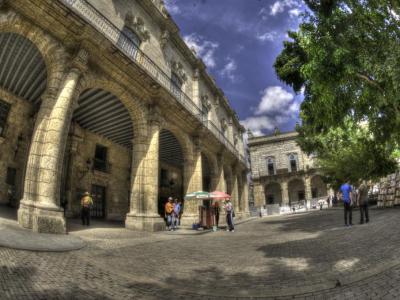 The Plaza de Armas is Havana's oldest square and was originally laid out in the 1520s. Most of the architecture seen here today is from the 1700s. All of old Havana's streets, Obispo, San Ignacio, Mercaderes, Oficios connect to the Plaza de Armas.

The 18th-century Palacio de los Capitanes Generales dominates the square. Interestingly, the street in front of the Palacio is lined with wooden tiles instead of the usual cobblestones. The Governor's home was once located here, and being fond of afternoon siestas, the Governor had them repave the road with wood to dull the noise from passing horses and carriages.

The center of the square is lined with magnificent royal palms. Don't miss the impressive marble statue of Carlos Manuel de Céspedes, who was instrumental in Cuba's path to independence.

Keep a lookout for a hidden treasure at the old book sale, held on the perimeter of the plaza six days a week.
Image by Eric Marshall on Wikimedia under Creative Commons License.