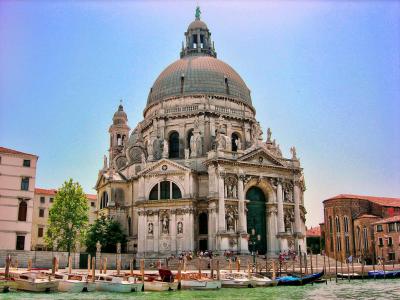 San Marco may be Venice's most famous church by name, but Santa Maria della Salute is by far its most famous by image and silhouette! Commonly known simply as La Salute, this grand historic church is largely recognized as the pinnacle of the city's Baroque movement.

La Salute is the most recent of the so-called “plague” churches. Back in the early 1630s, Venice was devastated by a plague that exterminated nearly 100,000 people, roughly one-third of the lagoon’s population. As a votive offering for deliverance from this pestilence, the Republic of Venice vowed to build and dedicate a church to Our Lady of Good Health (or Deliverance) which means “Salute” in Italian. Resting on a platform of more than 100,000 wooden piles, the church was designed in the then fashionable Baroque style, by Baldassare Longhena, who dedicated half a century to working on this project and lived just long enough to see it finished, in 1681.

The dome of the Salute was an important addition to the Venetian skyline and soon became emblematic of the city, inspiring painters both local, such as Canaletto and Francesco Guardi, and foreign, such as J. M. W. Turner, Claude Monet and John Singer Sargent.

The basilica makes for an interesting visit, too. It houses a small art gallery in its sacristy, which includes a Marriage Feast of Cana by Tintoretto, along with the allegorical ceiling paintings by Titian (the most important member of the 16th-century Venetian school) such as David and Goliath, Abraham and Isaac and Cain and Abel, and eight tondi of the eight Doctors of the Church and the Evangelists, all in the great sacristy, and Pentecost in the nave. Also by Titian are The Descent of the Holy Ghost, in the third altar to the left of the entrance, as well as St. Mark Enthroned with Saints Cosmas, Damian, Sebastian and Roch, the altarpiece of the sacristy.

Of a particular note is a highly symbolic statuary group at the high altar, called The Queen of Heaven expelling the Plague (1670), by the Flemish sculptor Josse de Corte. This theatrical Baroque masterpiece features the Virgin and Child rescuing Venice (depicted as a kneeling young woman) from the plague (depicted as an old woman).

Entrance to the Basilica is always free during the opening hours, however to enter the main sacristy (museum), a ticket is required. Whenever you choose to visit, do get your tickets in advance to skip the long lines. Once inside, you can treat yourself to a unique view of the adjoining plaza from the balcony and, perhaps, also a 30-minute organ recital after the service... so do check the events program in advance – and enjoy!

Tip:
Bring a drink with you as there are hardly any cafes around.

Opening Hours:
Daily: 9am-12pm / 3-5:30pm
During festive Masses, times may be subject to change
Image Courtesy of Flickr and Steven Gerner.
Sight description based on Wikipedia.