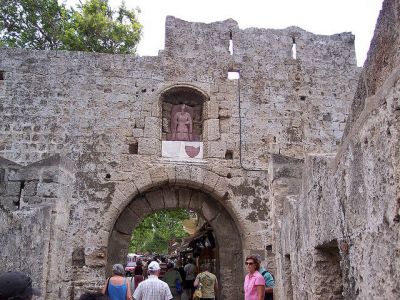 St. Anthony’s Gate, or the Gate of St. Athanasios, is a popular historic entrance to the walled city of Rhodes. The locals also habitually refer to it as Saint Francis' Gate due to the church of Saint Francis of Assisi, built by the Italians in the first part of the 20th century, located just outside.

As for the gate itself, judging by the coat of arms displayed above the entrance, it dates back to the times of Grand Master Jean de Lastic (1437-1454), and came into being as a result of the modification to the part of the wall near D’Amboise Gate, done by the knights from 1440 to 1442. The round tower of Saint Mary, designed to guard the gate, was also built in 1441.

Under the rule of Grand Master Pierre d’Aubusson (1476-1503), two bulwarks came to reinforce the fortification around the Gate of St. Athanasius, giving the stocky bastion its actual, massive outlook. Right above the opening of the drawbridge there is the coat of arms of the House of d’Aubusson seen along with the inscription “hoc antemurale”, reminiscent of the commissioning of the bastion in 1487.

Following the Ottoman conquest of Rhodes in 1522, the victorious troops of Sultan Suleiman the Magnificent marched through the Gate of St. Athanasios into the city. An inscription in Farsi quotes reinstatement works of part of the bulwarks commissioned by the Ottoman Governor Abdülcelil, in the wake of the fall of Rhodes into the hands of the Ottomans.

This gate was subsequently closed by the Sultan in a bid to prevent any further conqueror from passing through it, ever. It was only re-opened, by the Italians, in 1922 to mark the 400th anniversary of the Ottoman conquest of the city and the island.
Image Courtesy of Flickr and Richard Hughes.