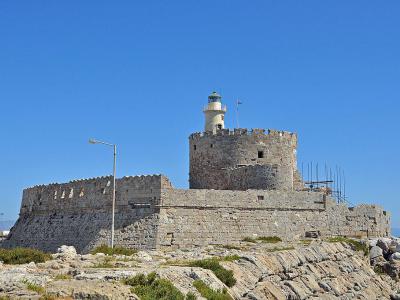 The imposing St. Nicholas Fortress is located in the Rhodes Old City looking out over Mandraki Harbor. In ancient times Mandraki Harbor was a military space and in the 15th century a guard tower was constructed there on the orders of Grand Master Raimondo Zacosta. Following the first siege, the tower was fortified. A bastion was added by Grand Master d’Aubusson and the newly formed fortress was named after the chapel inside it. It was largely thanks to the fortress that the Knights Hospitaller were able to fend off attacks from the Turks for so many years. Major sieges by the Turks were mounted in 1480 and 1522-23. The initial attack was thwarted, but the Turks ended up seizing power in 1522 and the Knights were forced to leave Rhodes.

When the fortress was built, it took into account the Ottoman use of cannons and other siege weaponry and its thick walls were impermeable for many years. Indeed considering their age, they are in excellent condition to this day. The fortress is hugely popular with visitors these days and it has been well preserved. You can walk along the path of the former moat, which has been dried out and provides a scenic, tree lined walking path.
Image by Shadowgate on Wikimedia under Creative Commons License.

This sight is featured in a self-guided walking tour of Rhodes, Greece within the mobile app "GPSmyCity: Walks in 1K+ Cities" which can be downloaded from iTunes App Store or Google Play. Please download the app to your mobile phone or tablet for travel directions for visiting this sight. The app turns your mobile device to a personal tour guide and it works offline, so no data plan is needed when traveling abroad.